In All Summer Long, music and summer are the main themes, but neither Woodstock or Bryan Adams or “69” find a home here. The latter may well be omitted because this graphic novel is aimed at young adults.  Nonetheless, it still rocks. All Summer Long begins on the last day of seventh grade (without any Alice Cooper references) in Eagle Rock, LA, California and Bina, 13, is upset that her best and platonic friend Austin (also 13) is going to soccer camp for a month. This means that they won’t be able to do any fun activities (which have included spotting celebrities including the dog from Dog Camp) for their “Combined Summer Fun Index” which they have done together over the last five summers.

So where does the music come into it? Austin’s Mom has “a job picking music for TV shows and she gets tons of CD’s from work” which she leaves in Austin’s room. These CD’s include fictional band Steep Streets, Never Again, which Bina takes a liking to. The journey over the course of the next few weeks is no ordinary coming of age musically themed story. Courtesy of Farrar Straus Giroux, XS Noize will take you through the world of rock through young Bina’s eyes.

Young Bina is bored. She finds it difficult to occupy herself without Austin. Bina’s boredom takes her to a dark place where she starts box set bingeing; however, she also does some more productive activities which include reading Homers Odyssey and playing the guitar. Eventually banned from box set binging by her parents, Bina starts to hang around with Austin’s sister Charlie (when she isn’t hanging out with her boyfriend) who has fractured her arm and can no longer work as a lifeguard. They discover that they are both music fans. Charlie is impressed with Bina’s ear for music; Bina is able to guess what Charlie is listening to on her headphones. Charlie shows Bina her vinyl collection which includes titles such as the fictional Junior Twins LP. One of Bina’s older brothers, Davey encourages Bina to pursue music as it’s her “thing” and starts to learn the chords for a Steep Streets song.

Meanwhile, Austin is not responding to Bina’s texts but has time to upload content to his “filtergram” page. Despite being upset about this, Bina continues to practice playing the guitar. Her improved skills are noticed by an impressed Charlie. Charlie says that her mom wished that she and Austin had musical ability and hoped they “would start a band together, like the Von Trapps but cooler”. Charlie shows Bina how to operate a turntable and confides to Bina how she really broke her arm. Another mystery of a lost key gets solved when the two girls go babysitting together. However, things start to go sour between the two girls. Bina starts to see Charlie as the bossy bully Austin warned her about. Although Austin comes home; Austin is definitely not as pleased to see Bina as she is to see him. 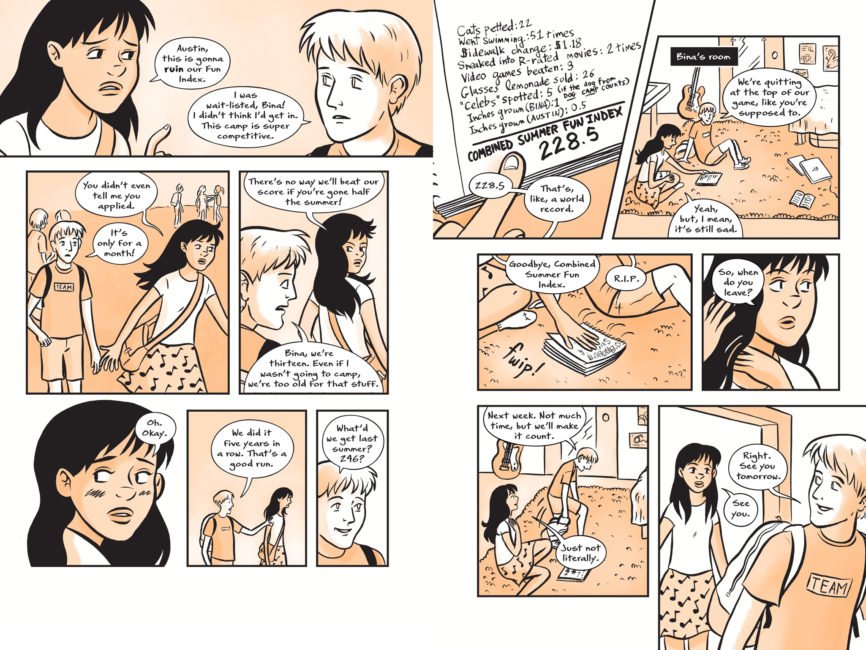 Despite Austin’s lukewarm reception, he invites Bina to come and see Steep Streets with him and his mum who is going to the gig as part of her work. A thirteen-year-old Bina is very excited about going to her very first rock gig. And what is her biggest dilemma: What to wear? Bina’s mom comes to the rescue allowing Bina to wear her 1980s vintage jacket but holds back on letting Bina wear her leopard print dress. Bina has an amazing time at the gig. She gets to meet the frontwoman and lead guitarist who gives Bina a free record and some invaluable but still free advice to not “let anyone trick you into playing bass. The worlds got enough chick bass players” and to “start a (her own) band”.  We don’t know to what extent Bina takes this advice, but Bina makes a pro-active start.

What makes All Summer Long unique and special is its excellent use of black, white and orange cartoons, which succinctly show the ethnicities of each of the characters without having to use words to draw attention to race. The characters don’t, so why should the storyteller. Larson’s storyline of Bina’s other older brother Johnny and his partner Deon adopting a baby is not just accepted, but celebrated and is a triumph for progress, happiness and harmony.  The foreword says that All Summer Long is “for the weirdos and the part-time punks”. On this, I must disagree with Larson; it is for everyone.