Ben Howard is pleased to share details of an exclusive one-off global live stream event to celebrate the release of his new album, Collections From The Whiteout, out on 26th March via Island Records.

Filmed at the iconic Goonhilly Earth Station on the Lizard Peninsula in Cornwall, UK, Ben and his band will perform new album tracks for the first time. This show marks the first band performance since the conclusion of a worldwide tour in January 2019, which culminated in a sold-out four-night run at Brixton Academy.

The film will be streamed as live on 8th April across different time zones.

Tickets go on general sale in the UK at 9 am this Friday 19th March via Ticketmaster/Universe. There will also be a pre-sale for members of Ben Howard’s mailing list from Thursday 18th March at 9 am, where tickets will be available at a special discounted price. Register here.

Ben is proud to be supporting the Trussell Trust and Médecins Sans Frontières /Doctors Without Borders. Customers will be able to make a donation of their choice at the checkout when buying their ticket via Ticketmaster/Universe.

The Trussell Trust is a national charity that supports a network of local food banks to provide emergency food to people in crisis, while campaigning for a better, more just future where everyone can afford their own food.

Médecins Sans Frontières/Doctors Without Borders (MSF) is an international, medical humanitarian organisation working in more than 70 countries around the world.

The broadcast is produced in association with the award-winning livestream team, Mercury Studios alongside Island Records.

As previously announced, Ben’s pair of shows at London’s Royal Festival Hall on 18th and 19th September have now sold out.

Collections From The Whiteout heralds the first time Ben has opened the door to collaboration, snaring The National’s Aaron Dessner on production, and a team of players from the likes of Big Thief, This Is The Kit, and drummer/producer Yussef Dayes. Strings were orchestrated by Bon Iver/Laura Marling collaborator Rob Moose.

Collections From The Whiteout has an immediately breezier tone than Ben’s last record, whilst losing none of the experimental tendencies that made Noonday Dream so compelling.

The subject matter, previously shrouded in obfuscation, takes a scrapbook approach to Ben’s lyricism. Mostly based on snippets of radio news or headline scrolling, he’s let his imagination take those snapshots to wild and remote places, creating stories within stories. Characters are formed, histories are inferred. It’s beautifully random and makes for an engrossing whole. 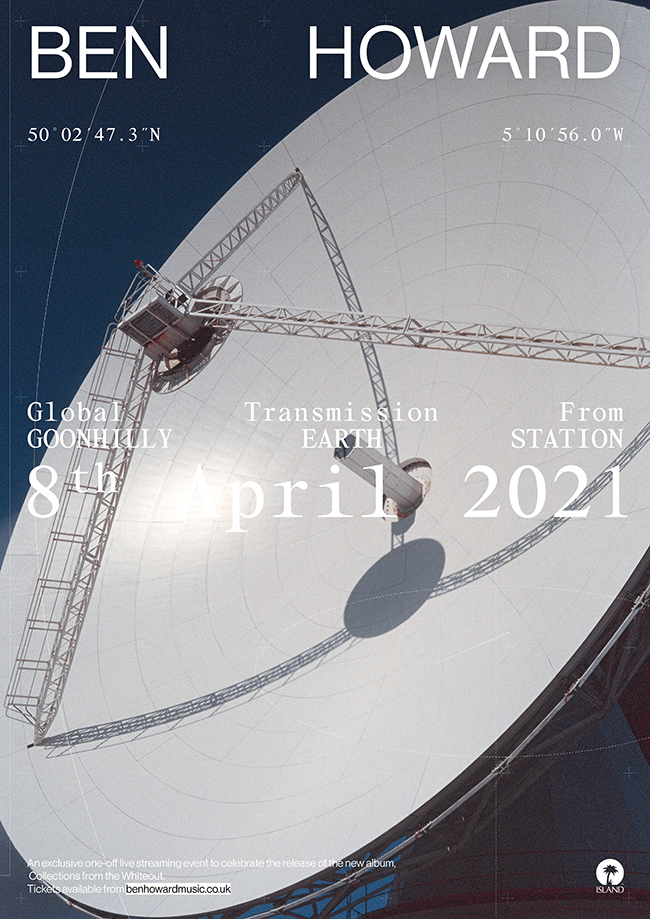 Ben Howard kicks off his UK arena tour this month, including three sold-out shows at London’s Alexandra Palace. Ben released his critically acclaimed second album 'I Forget Where We Were’ last year which debuted at...

Ben Howard follows the recent release of his fourth album with three new headline dates in the UK this September. The acclaimed British musician debuted at number one in the UK last month with Collections...

Ben Howard is pleased to announce two shows at London’s Royal Festival Hall for the Autumn. The British musician, who releases his fourth album, Collections From The Whiteout, on 26th March, will return to the...