The Vamps are back and this time they're doing it on their terms, with the release of their Missing You EP. Entirely co-written and co-produced by the band. Live Nation and The O2 have today announced that The Vamps are the only band to headline The O2 for 5 consecutive years.

The four track EP features Right Now a collaboration with their friends, Krept & Konan, and this song is available on Spotify and to download now as an instant grat when the EP is preordered on iTunes here. The other tracks featured are title track Missing You, Waves and a special acoustic version of All The Lies (their recent release with Alok and Felix Jaehn).

Lead track, Missing You was written by frontman Brad Simpson, and he has said of the track, “Missing you is a song I wrote with a friend of ours called Jordan Riley, he’s a producer/writer from Newcastle and a frequent collaborator. We were finishing a song of ours called Hair Too Long, and he started playing this progression on piano, the melody and lyric came pretty quickly. We got another day in at his studio and finished the verse and pre chorus. The songs about a previous relationship and the struggle to move past it, that feeling of looking for love but not having the closure or just not being over it yet.”

The EP marks the band, who are now all in their mid 20s, taking charge of the music and creative direction, and showing off their individual talents in songwriting and production. Talking of the need to assert some control, the band commented “We’ve always been involved in everything we’ve done, however we’ve never sat down together and planned an entire campaign. This time, from photo shoots, music videos, styling to songs, we have each been there every step of the way to ensure everything fits with how we’re feeling. We want people to feel like they’re part of this EP, and that’s why every detail has to be on point. It’s been really enjoyable to get involved every step of the way.”

Speaking of Right Now, the collaboration with Krept & Konan, drummer and producer of the track Tristan Evans  added “Grime is a genre where you have much more opportunity to say how you feel, there are generally more room for lyrics and the flow is completely different to say a pop/rock song. Right Now is not a collaboration anyone would expect, and the song is all about appreciating life and really living in the moment! I remember we recorded Konan’s verse in between two shows, on the night of the Birmingham show I returned to London to record Konan at 3am, then headed early in the morning to the next show which was in Liverpool. There was a really good vibe working with Krept and Konan.”

Waves was written by bassist Connor Ball at home while they had some down time over the recent Christmas period. Talking of the track, Connor added: “I was really inspired over that time so I just sat down with an electric guitar one day and started jamming the riff! The term Waves in the song is referring to the ups and downs in a relationship that can ultimately bring it to an end. It also talks about feeling a sense or worthlessness and that you’re not gonna find someone new. One of the lyrics is that even the ghosts in your home want to leave”.

The fourth track featured on the EP is a special acoustic version of All The Lies. The original version with Alok and Felix Jaehn was released last month and was added to no less than 29 New Music Friday playlists around the world and is steadily rising up the global streaming charts. This truly international collaboration set the mood with The Vamps’ catchy vocal piece and touches of Felix Jaehn’s instantly recognisable production style, which solidly builds a tropical pop vibe. The original version of the song can be listened to here.

Speaking of their plans to do an EP over a traditional album, guitarist James McVey, who recently came 5th in the 2018 series of ITV’s I’m A Celebrity, said: “Over the years we have enjoyed working on our recording/production skills. We’ve been keen to produce bits on all our albums, but decided to take the step and actually produce something in its entirety: the Missing You EP. We have done an album a year for the last five years too, so wanted to try something slightly different. The EP takes us back to how we started The Vamps: instruments and melody. We haven’t used big synths like our previous songs and have focused on lyrics more than ever before.” Brad added: “It gave us the chance to experiment and although it’s a small batch of songs, it’s a very eclectic mix. Working in the dance world, with the Krept and Konan collaboration and then songs like Missing You and Waves, feel very true to where we are at as a four.”

The Vamps are one of the most successful British bands of the last decade. They have gone onto have huge amounts of global success with over 2 billion streams worldwide. Their first two albums, Meet The Vamps and Wake Up are both certified Gold in the UK. In 2016 they released All Night, a collaboration with Norwegian DJ Matoma, as their first single from their third studio album Night & Day. All Night quickly became their most successful single with 3.5 million sales and 350 million streams on Spotify alone. In 2017, they scored their first number 1 on the Official UK Albums Chart with Night & Day. They are also a force to be reckoned with on social media, with almost 6 million likes on their Facebook, over 4.09 million followers on Twitter and 2.5 million followers on Instagram. They have continuously toured since their debut in 2012 and were recently announced as the first band to ever headline London's O2 Arena 5 years in a row. Later this month, they kick off their Four Corners UK & Ireland 2019 Tour at Plymouth’s Pavilions on Saturday 27th April. They spend the following 5 weeks visiting all corners of the UK before wrapping the dates in Bournemouth on 1st June. 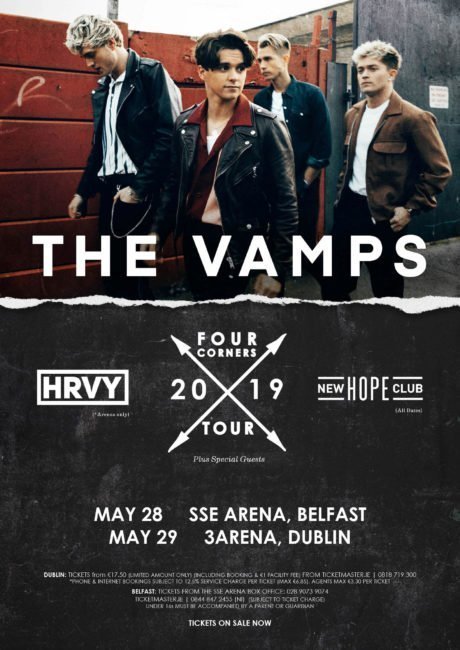 Following the massively successful global tour of 2016-17 in support of their 16th studio album The Book Of Souls IRON MAIDEN will take to the road again in 2018 with a series of arena and...

Mumford & Sons are excited to announce details of a huge world arena tour in support of their forthcoming fourth album, Delta. An incredible 800,000 tickets go on sale for sixty dates from Friday 12th...