Legendary British band The Stranglers have today presented a 400-year-old local pub in Surrey, the Star Inn, with the prestigious PRS for Music Heritage Award. The accolade is given to those live music venues across the UK that have played a crucial role in helping to create music history, by giving now-famous acts their first ever gig and helping them on their way to success.

Originally from Guildford, The Stranglers first performed at their local hometown pub, the Star Inn, on 21 December 1974, just three months after forming (initially as The Guildford Stranglers), in September that same year. This early act of generosity marked a turning point for the band which would see them become vital instigators of the UK punk rock movement, and release 23 Top 40 singles, 18 Top 40 albums, and a slew of now-iconic hits including Golden Brown, Peaches, No More Heroes, and Hanging Around, in the years that followed.

A lucky opportunity to play at their local music venue, saw the band attract a dedicated following from the very start, cementing a special relationship between band and venue. PRS for Music, which protects the rights of more than 135,000 songwriters and composers, ensures music creators are represented whenever their music is used or performed in public. The organisation established the PRS for Music Heritage Award in 2009 to celebrate the important role that music venues play in supporting songwriters at the start of their careers, giving them a platform to perform in front of a live audience for the very first time. 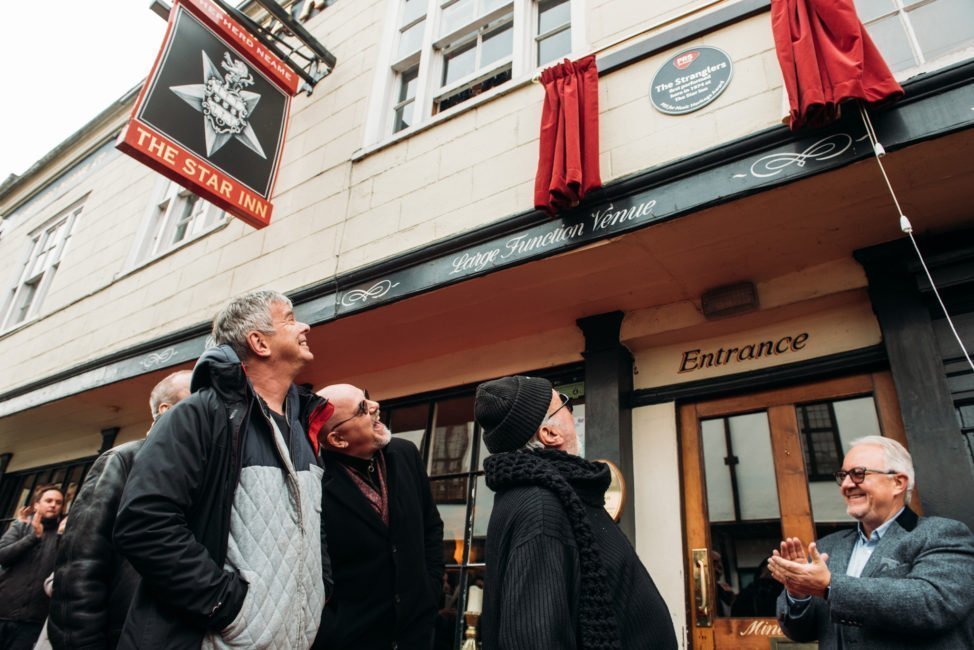 Grassroot music venues like the Star Inn provide a crucial environment for new and emerging acts to harness and develop their talent, try out new songs, experiment with creative identity, and build the foundations for a long-lasting fan base. These venues have witnessed the birth of some of the nation’s most loved music legends. Previous PRS for Music Heritage Awards have been given to venues that have helped the likes of Queen, Madness, Pulp, Spandau Ballet, UB40, Status Quo, Soul II Soul, Sir Elton John CBE, Blur and many more at the start of their musical careers.

This year’s PRS for Music Heritage Award plaque was unveiled by The Stranglers at a special red carpet ceremony today at the Star Inn, Guildford. The unveiling of the plaque sees the start of what’s sure to be a hectic year for the revitalised band as they embark on their upcoming UK tour, Back on the Tracks, spanning 19 dates, 28 February – 30 March 2019. The Stranglers, said: "The space that the Star Inn has created here is incredibly valuable to British music culture, they’ve played a huge role in giving emerging acts, like us at the time, a stage, helping them to thrive. They definitely deserve to be acknowledged with the PRS for Music Heritage Award to mark this pivotal moment in British music history.”

Georgina ‘George’ Baker, Owner of the Star Inn, said: “We feel very much part of the fabric of The Stranglers’ history and so it’s an honour to receive this award. We pride ourselves on investing in emerging talent and giving them the platform they deserve and plan to do so for a very long time to come.”

Nigel Elderton, Chairman, PRS for Music, said: “Ten years ago, we established the PRS for Music Heritage Award, to recognise live music venues that have given some of the UK’s most beloved and iconic acts their start. These small, local venues are where artists can earn their first bit of money from making music and often play a life-changing role at the very beginning of their careers, leaving an indelible mark on culture. Those artists go on to bigger stages, and bigger audiences, across the UK and indeed the world. I am delighted that we are honouring the Star Inn that has served as a music venue for more than 400 years – and continues to be a local hub for creatives and music fans alike.”

“Due to adverse weather conditions across the island of Ireland, unfortunately, The Stranglers & Therapy? Have been forced to postpone their Irish tour scheduled for this weekend, including the Belfast date at The Ulster Hall...

The Stranglers rescheduled European tour in autumn 2022 has been extended with 3 dates across the Irish Sea added now added. These shows will be their first visit since 2019. The tour calls at Limerick...