There are a few albums that can instantly transport me to my youth in just a few opening notes; Sparkle In the Rain is on that short list. As an American heavily in to U2 and “First Wave” British bands, I had a passing familiarity with Simple Minds after hearing New Gold Dream in 1982, I had liked a good chunk of what I had heard and had bookmarked the band as one to keep in mind when wandering around the record store. With the release in 1984 of Sparkle in the Rain for all intensive purposes, I was a convert.

Simple Minds was formed in 1977 in Glasgow by childhood friends Jim Kerr and Charlie Burchill. Sparkle in the Rain was the sixth album from the band. It was a departure from their earlier albums. The prior albums were filled with moments of brilliance and originality, but “Sparkle” had something different. The album struck gold with the perfect combination of Kerr’s engaging vocals and uplifting lyrics; Charlie Burchill’s crystalline guitar chimes, Mick MacNeil’s throbbing synth beats, Mel Gaynor’s powerhouse drumming and Derek Forbes commanding bass. Each element was in perfect balance, the sum of the band becoming greater than the quality parts. The band jumped a number of steps on the music business game board with this bold and inventive album. They cemented all the promise of the first five albums into this masterstroke album that would move them onto the world stage. The Album earned them their first #1 and conquered Europe, the Antipodes and Canada. It would go on to double platinum in the UK. It also established Simple Minds as the third member of the Celtic Rock trinity with U2, and Big Country. Like the other two bands, Simple Minds with “Sparkle” captured the bravado of the era in their music.

Sparkle in the Rain was produced by Steve Lillywhite, the man who had in the past also manned the faders for U2 and Big Country. The fingerprints of Lillywhite’s dynamic sound were all over the production of “Sparkle”. The recording process for the album had initially utilized locally available studios in a “catch as catch can” style recording set up during the New Gold Dream tour. Eventually, the final recording sessions took place at The Townhouse in London.

The contents of the re-release of Sparkle in the Rain deluxe set has been described in detail on our site, and for those interested in going into the specifics of the boxed set I will refer you to said article. As a quick overview of what is on offer, it contains 5 discs and is a Simple Minds collector’s dream, with new liner notes, rare “b” sides, a live concert recording from Barrowlands in Glasgow and a three-track BBC 1 studio recording session. It also contains a 36-page booklet, new interviews, and rare photos. Charlie Burchill oversaw the remastering of the album at Abbey Road Studios with Andrew Walters on the desk. Any admirer of the album or band will not be disappointed at the considerable amount of multimedia made available by this box set. 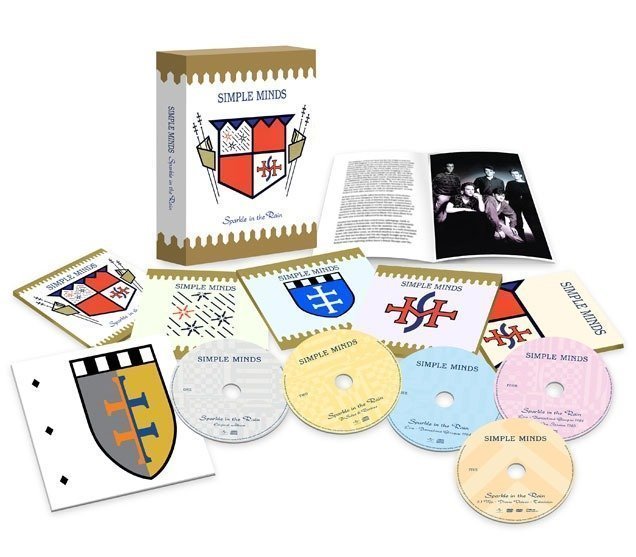 From the count off into the song, the first track Up on the Catwalk simply explodes out of the speakers, the bass groove and drums on this track are epic, with its “hammer of gods” percussion, the song grabs you and does not let go. Kerr is in fine fettle with a “kick the last nail in” delivery. The song is a droll homily on fame. Informed by the hurly-burly the band had experienced up to this point touring, and the recognition of fame’s empty vacuity. Catwalk is a barnburner of a song that announced that Simple Minds was no longer going to be an esoteric, fringe band fiddling with synths.

Book of Brilliant Things was a song that served as a bridge from New Gold Dream. The song reads as a prayer of thanks. Kerr and Burchill have never denied their faith, happy to let fellow believers recognize the fish drawn in the sand without rubbing it in the face of those otherwise persuaded. Another perspective for the song could be discussing mankind’s shared archetypes through history. The shimmering guitars, emphatic drums and bass with the evocative keyboards intertwine with Kerr’s heartfelt and excited delivery for another stellar track.

There is timelessness to Speed Your Love to Me, a great 4:25 mins of pure power pop. It is jaw-droppingly good, hitting all the bases for a winning song. The song is a perfect blend of the groove provided by the stellar rhythm section and Burchill’s guitar which takes the emotion of the song higher and higher. Add Kerr’s lilting vocal interplay with Kirsty MacColl’s voice and it becomes flawless. The turn of the lyrics was also apt, “she would like to make a wish, twenty-four cannot be this”, lyrical gold.

Waterfront is a signature Simple Mind’s song. The incessant telegraphing beat followed by the explosion of sound cannot help but produce goosebumps. The song is pure adrenalin, the driving percussion and echoed keyboards make for a cathedral of sound, Burchill brings it home with his swirling guitar as Kerr’s delivery perfects this soaring anthem. Symbolism abounds as Kerr blends the imagery of Christian baptism rites with his observations of Glasgow’s Clyde docks dwelling on their past and their future. “I’m going to walk up to the front, come in come out of the rain.” When experiencing the song live no matter the size of the venue it is like someone unleashed a hurricane, the power and energy are palpable.

East at Easter again abounds in Christian symbolism and has been described by Kerr as a plea for peace in the face of the violence and discord of the world. Kerr builds the drama of the song with the earnest pleadings of a true believer, optimism in the face of despair. Burchill’s guitar builds the emotion as the song slowly builds and then takes off at the chorus. What could have come off as cloying, never loses the thread of sincerity that lifts the song to another level?

Street Hassle was a cover of a Lou Reed song that was the title song of his 1978 album. The band did an abbreviated version taking the first and third sections of the song. The band again delivers a spectacular performance. Kerr performs an apt homage to one of his lifelong musical heroes. Kirsty MacColl again provides a wonderful vocal to add that dash of special something to the song.

White Hot Day is a powerful song that discusses ever moving time and the tricks it plays. It relentlessly moves forward, even as it seems to the individual like it speeds up and slows down. Kerr would go on to discuss time and her tricks again in the title song from the album, Once Upon a Time. The sound of the song was a perfect amalgam of New Gold Dream with Steve Lillywhite’s trademark sonic panache.

C Moon Cry like a Baby is my personal favourite of the album. The glistening guitar makes for a stunning sound. The E bow is amazing as it creates a complimentary atmosphere for the thought-provoking lyrics. The lyrics discuss seeking the missing piece to the eternal puzzle, citing faith beyond understanding. The song is sung with such convincing optimism, I believe Kerr could sell coals to Newcastle with his persuasive vocal.

The percussion provides the kick in the title of The Kick Inside of Me In the song Kerr avers he is not going to let the fire go out as he fights against forces of oppression. Kerr is channelling pure ebullience in this song, as he entreaties the listener not to let go of who you are no matter the temptation.

Shake Off the Ghost is a homage to the band’s accomplishments on their prior keyboard laced albums. Gaynor’s percussion is like artillery firing in the distance. Burchill, MacNeil and Forbes come to the forefront to show their mad musical skills. This edgy instrumental coda at the end of an exuberant, heartfelt album was just right signed off.

The B sides and outtakes of the boxed set give the listener an insight into the development of the featured songs on the original release. The concert recordings are exciting and give an insight into why the band and the album would become so beloved by fans. You can get an idea of how effervescent Kerr and the band are in a live setting from these recordings.

If Sparkle In the Rain lurks at the back of your musical collection dust it off and give it a go. If you never owned it or lost it along the way, you will not find a more thorough fleshing out of the album than this boxed collection. Sparkle in the Rain is truly one of Simple Mind’s masterworks, and after you encounter the album you can understand why it came to influence bands like Manic Street Preachers, Radiohead, The Killers and Primal Scream. The album is one of the extraordinary musical guideposts of the 80’s.

On 1st November, UMC will release 40: THE BEST OF – 1979-2019, a new compilation album that covers all 40 years of the legendary band Simple Minds recording career. It captures their early experimentation, cross over...

Simple Minds have released a brand new song and video today 'Blindfolded', the song has already been played live this year. Some background on the song courtesy of simpleminds.org and song lyrics. First mentioned as...

Simple Minds today release MAGIC, the first single to be taken from their new album WALK BETWEEN WORLDS, out 2nd February on BMG. MAGIC finds Simple Minds at their most instant and anthemic best. It’s...