Princess Goes To The Butterfly Museum have released AIRHEAD from their forthcoming debut album, THANKS FOR COMING which will be released physically on May 7th.

Hot on the heels of the brooding and atmospheric 'Armageddon Suite’ Princess Goes To The Butterfly Museum are back with 'Airhead’ which drummer Peter Yanowitz describes as “A steamy marriage of two of Princess’ biggest influences, the French techno label Ed Banger and the band Boston (of ‘More Than A Feeling’ fame)”. Fellow band member Matt Katz-Bohen adds proudly "I would like to note that there are no guitars on that track. All of that heaviness is strictly synthesiser”.

Listen to 'Airhead' - BELOW:

Princess Goes To The Butterfly Museum eschews traditional rock instrumentation in favour of a stripped-down synthesiser-and-drum attack. A wealth of disparate influences flow into Princess Goes to the Butterfly Museum’s songs - the glam, experimental, ambient music of David Bowie, Giorgio Moroder’s ‘70s disco productions for Donna Summer, ‘80s new wave dance music, contemporary electronic dance acts like Justice, and the roster of France’s Ed Banger label. A theatrical sensibility is part of the trio’s DNA, especially in live shows, having met several years ago on Broadway during the production of Hedwig and the Angry Inch.

Michael C. Hall is a musical talent and a longstanding Broadway performer, having played leading roles in Chicago, Cabaret, Hedwig and the Angry Inch and was selected by David Bowie to star in his musical, Lazarus. He has also earned many accolades for his acting, including an Emmy nomination for his work on the HBO drama Six Feet Under and a Golden Globe and Screen Actors Guild Award for the acclaimed Showtime series Dexter. Hall assumed the title role in Hedwig and the Angry Inch on Broadway on October 16, 2014, and performed the role until January 18, 2015.

His bandmates boast similarly prodigious resumes. Peter Yanowitz began his career playing drums in The Wallflowers before going on to co-found indie stalwarts Morningwood and work with artists as varied as Natalie Merchant, Yoko Ono, Andrew W.K., Allen Ginsberg, and Billy Bragg & Wilco, who enlisted him to perform on their seminal ‘Mermaid Avenue’ collaboration. Keyboardist Matt Katz-Bohen spent the last decade touring and recording with Blondie, in addition to working with Boy George and Cyndi Lauper.

Stay tuned for more to come from Princess Goes To The Butterfly Museum! 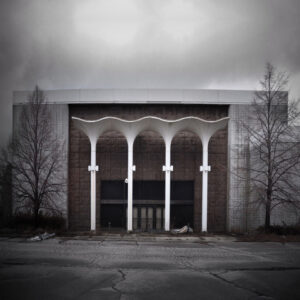 Princess Goes To The Butterfly Museum have released “Armageddon Suite,” the third track from their forthcoming debut album, THANKS FOR COMING. “‘Armageddon Suite’ is about having a more heightened romantic sense facilitated by the world...

INTERVIEW: Princess Goes To The Butterfly Museum discuss debut album 'Thanks For Coming'