A moniker like Pixey invokes certain expectations: petite, spirited, mischievous, fond of dancing. Witnessing a performance and chatting with the artist Pixey reveals all of the above, as well as drive, dreams, and a solid list of achievements accumulated during a pandemic which halted the rising trajectories of many newer artists. 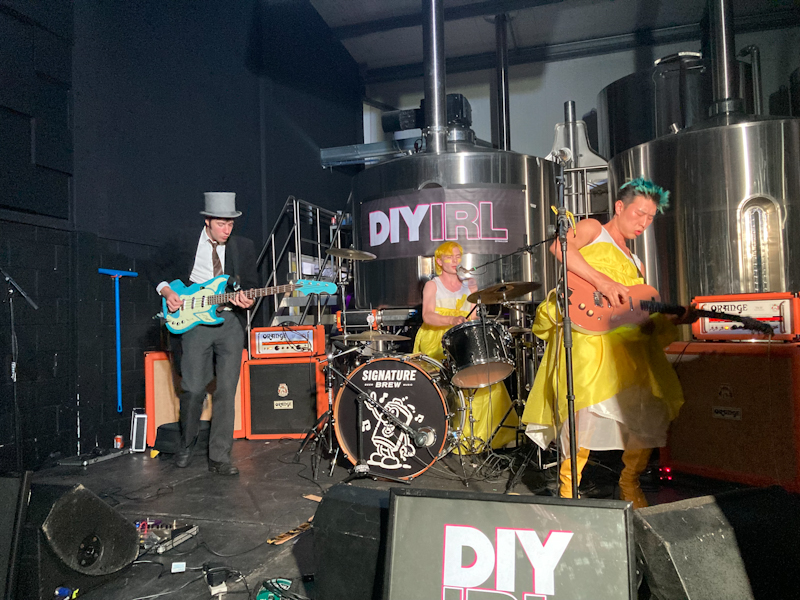 Molly Payton took to the stage next. Much of her repertoire available online had me expecting a lovely singer-songwriter acoustic set. Instead, she showed up electric with full band rocking songs of love, lust, love lost and the various complexities or states in between. Listeners were tempted to assume that the songs were penned and performed with the authenticity of “based on a true experience.” After ‘No One Else’, a song she explained she hadn’t played in a while and performed solo with electric guitar, we hoped there had been enough distance in time and place between herself and the songs source of inspiration.

As for Pixey, she closed the evening in the first headlining set of a career initiated five years ago. Pixey glowed and grooved through a fast-paced set. Having listened to her music before the show, watched some well-produced videos and admired fashion sense and branding esthetics that were fresh and whimsical, I was looking forward to experiencing Pixey live. When serendipity placed me next to the band at a taco stand before the set, I requested a quick chat post-gig so that XS Noize readers could learn a bit more about one of Northern England’s rising talents. 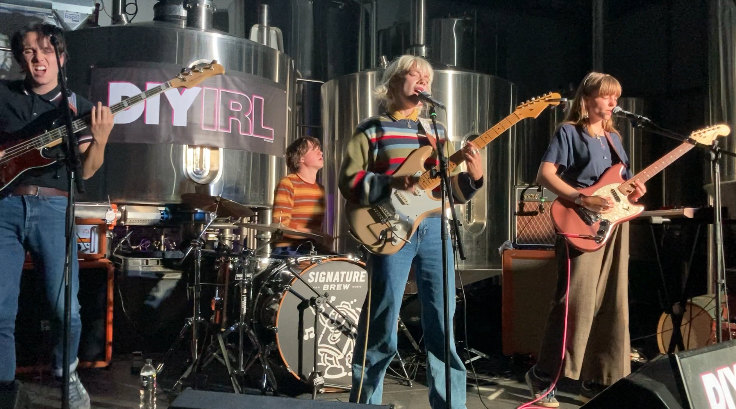 Pixey grew up in Lancashire and currently resides in Crosby, Merseyside near Liverpool. Her new EP releases 29th October on Chess Club Records, a label particularly adept at aligning itself with talent early in their careers. Grouplove, Wolf Alice, Danish sensation MØ, and Sundara Karma are a few notable examples of Chess Club artists or alumni.

When asked what people should know about Pixey, she answers without hesitation, “First and foremost, I’m a producer. That’s my favorite thing to do. I write and produce all of my music myself, as well as a few co-writes. I would say I’m all about break beats, dreamy, psychedelic riffs and mostly things that are upbeat.” 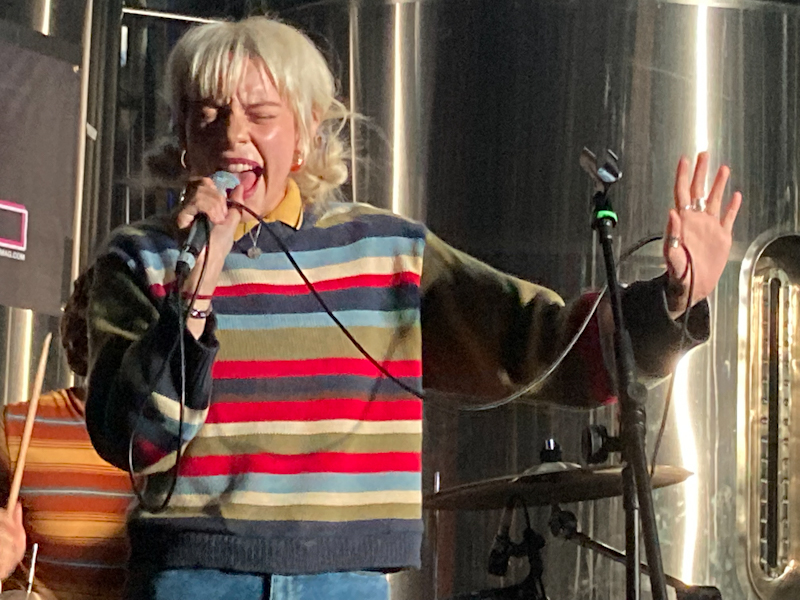 The artist cites De La Soul as a major influence. “As soon as I heard the sort of things they were sampling, taking music and reinventing it, I really wanted to do my own sort of spin on it. I started making my own samples, trying to make my songs sound nostalgic, like something from the past or as if they’ve been taken off of a record like guitar parts and drum beats, just kind of trying to do it myself. It’s quite satisfying when someone mistakes one of my riffs for a sample. I really like that. It’s a good compliment.”

While Pixey is self-taught as both a musician and producer, she comes from a musical home. “My mum’s a piano teacher – but I never let her teach me! I always said, ‘Nope! You’re not teaching me! I’m going to do it myself! She’s a saxophone player as well, but I always leaned more toward guitar. I haven’t been playing for that long so it’s still quite nerve-wracking playing in front of a lot of people, it’s only been a few years.” 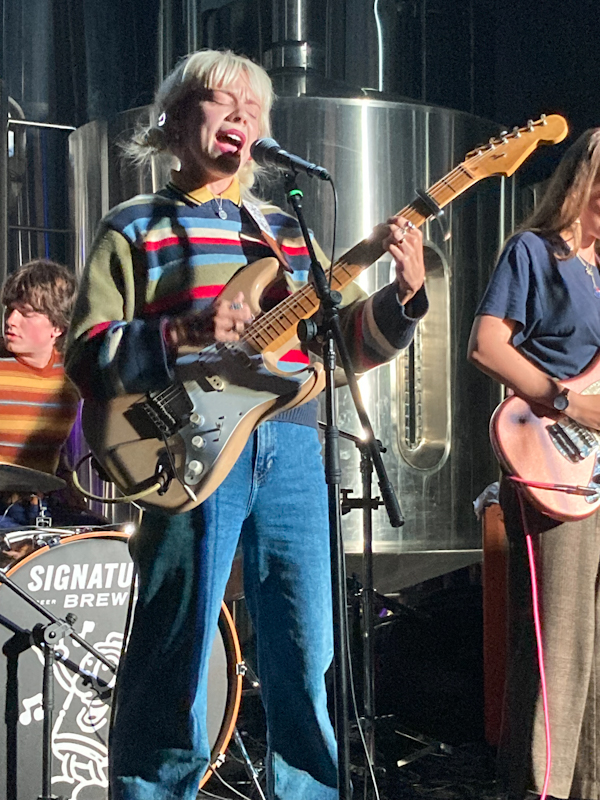 Pixey has been writing music and performing since 2016, a time she describes as, “after a serious illness, I realized I didn’t know what I was waiting for in terms of doing something I really wanted to do. So I started writing and producing. And now I’m here which is really exciting.”

So where does the name Pixey originate? “My mum was really adamant that I didn’t use my real name and we were bouncing off ideas when she said, ‘What about Pixie? You’re so tiny and small.’ And I said, ‘Yeah, sure.’ So I changed the spelling from “ie” to “ey” so I didn’t get sued and use that name.” She jokes that once an internet search on her name turned up “a hilarious brand spelled the exact same way. It’s a vibrator brand called something like ‘Pixey Signature Wand’ and I was like what’s that??? I looked at it and thought ahhh…maybe we can do a collab or something,” she laughs.

Pixey notes the upcoming Chess Records EP Sunshine State has six tracks, three of which have been released, receiving notable radio play on BBC1: the title track ‘Sunshine State’, ‘Life in Stereo’, and ‘Take Me On’. A prolific writer, she shares, “I have so many songs! Me and my label we have this joke about the ‘Pixey tune bank’ that I just add to all the time and it’s currently about 20 songs strong. We go through it and wonder which one should we release next? I just love writing. Performing is cool but I’m really at heart a writer and a producer and that’s where my strengths lie.” The writer or this article would argue that stage performance is also a strength. 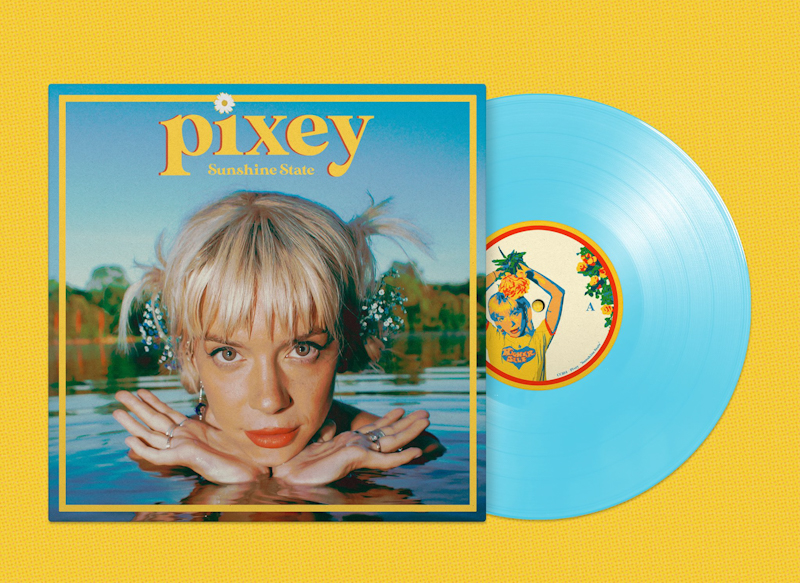 Pixey continues, “I write all the time. A week without writing is for me a bad week and seems really strange because I’m not getting out my thoughts. The production side of it for me is so important. I can see myself doing that really long term, producing for people. That’s where my heart lies and I love doing it.”

As Pixey has advanced on her path as a producer, it became apparent that there is room for more inclusiveness in the industry: “I just think there are not enough women who are in the production side of things. It can be hard to find a mentor who you feel you can relate to as a woman in the music industry. Although I’ve learned a lot from male producers, I’ve only worked with male producers which isn’t very uncommon. Most people do, but I’d love to see a wave of female producers doing everything: playing, writing, arranging. For me that is the most joyous part of music and is something I love to do, what I really want to do.” 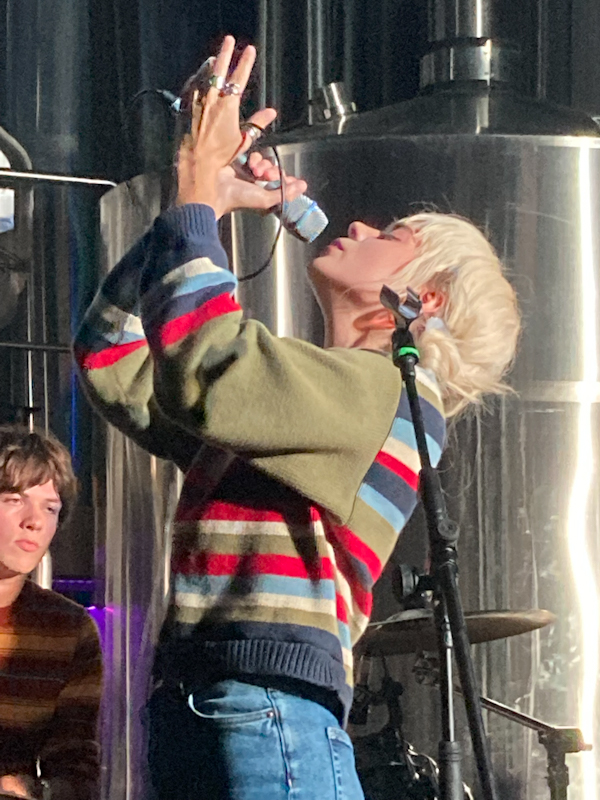 Unlike some bands who test and refine songs live before taking them into the studio, Pixey works on songs, bringing to them to a fully produced and finished state before taking them live. “Performing is fun, but I only bring the songs live once people have had them already and can listen to them. That’s why I’m always writing stuff that is so difficult to perform (laughs). ‘Sunshine State’ that first song in the set is a mouthful. I’m there going [she mimics a breathless parody or herself] “Don’t stop, youcandowhatyouwantto’ and thinking ‘Why did I write that this fast? I could have taken it down a few bpm.’ I definitely don’t test songs out live first. If I did, my songs would not be so quick!”

Pixey’s recent music production during the pandemic and lockdown has been consistently upbeat. When asked how she fared during this difficult time and what motivated her to keep going her answer is atypical in comparison to many. “It’s really interesting. Before Covid I was unsigned and only writing for myself really. If anything, the time was good for me, not the pandemic obviously, but it gave me the time to hone my production skills and I didn’t feel like I had to be in a job or do something different. I had the time to put together that EP and write it and produce it. It literally came together in about the first two weeks in terms of the actual tracks.

“Then during Covid, Will Street signed me to Chess Club Records which was amazing. I was so so happy. If anything, this time kind of made me. I don’t think I would have had the same kind of attention for my project because people tend to go a lot off of live, especially for smaller artists. But live didn’t exist anymore so there was time for production and writing and doing it all myself, not having to be in a studio, not working with anybody else. It was a bonus that I could work remotely with James Dring [whose credits include Jamie T, Gorillaz, Lana Del Rey…] who helped me with my production and co-produced three tracks. That was the most seamless, easiest process. I love working remotely. I’m quite a shy person really. I enjoy my own company. I enjoyed the time that Covid gave me and the space it gave to emerging artists like me who do everything, to really shine, so it was a curse but also a blessing.”

In describing her growing production abilities, Pixey remarks, “It’s funny. I wasn’t trained in it and for the longest time felt like there was no room for someone who wasn’t trained in it, who hasn’t gone through LIPA (Liverpool Institute of Performing Arts) or something and learned say, sound engineering. The more I was getting into it, the more I was realizing that actually I can do this, that you didn’t have to be a sound engineer to be a producer. It helps, but you don’t have to be. And I’ve learned so much over that time. If somebody can come to me and tell me ‘This is what I want this to sound like, or this is what I have’ and don’t have the means to do it. That’s my dream. I’d love to be a producer for others, or a writer. I enjoy both those things. Whether it’s writing for people or producing for people, I think that’s what I would really love to do. I’ve just got to get a hit and then everyone will want to come work with me!”

When asked to give some thought to what the future holds another five years down line, Pixey’s writer and producer dream, a recurring theme of our conversation, resurfaced anew, but not only. The artist mused, “I’ll be one of two things: I will be sick of performing and I’ll be in the fast lane being a producer or a writer for some crazy people that I’ve always admired; OR whatever’s going on here will take off and I would love to be playing Glastonbury. It would be amazing to have an album of my own, for it to exist. That’s been my dream for a long time and I think that hopefully in five years Pixey will be something more widespread than it is now.”