INTERNATIONAL is the 4th single released from The Irrepressibles forthcoming third album. The tracks pro- International message, artwork social campaign, and music video are a rallying call for compassion and a positive message about what Internationalism does for the world and for us as people. The message is artistically poised to come from the future, like a warning to the direction of nationalism we are currently taking politically in the UK. The video features close friends of songwriter/composer Jamie Irrepressible who are either EU citizens living in either London or Berlin. In the track and music video, they speak in their native tongue - French, Bengali, Turkish, German, Spanish, and Italian - but all communicate the same words regarding the power and positivity of Internationalism politically and global compassion and love.

International follows singles Anxiety, Dominance, and Submission is taken from the long-awaited forthcoming Irrepressibles third album. The video for 'SUBMISSION' directed by Greek-Cypriot Director Savvas Stavrou has recently been shortlisted for 'Best European Music Video' at the ECU 2019 European Independent Film Festival Awards that will take place in Paris, France, in April 2019, with airplay of the track on 6Music by Tom Robinson. A photography collaboration with Italian-born photographer Paride Mirabilio in East Berlin was recently featured by Berlin-based art/fashion/porn magazine Pornceptual together with a video for the track by Turkish based video artist Mertcan Mertbilek. The track was also recently played at Ministry of Sound as part of fetish night Torture Garden.

Check out the XS Noize video premiere of 'International' - BELOW:

The forthcoming album created by Jamie Irrepressible whilst residing in Berlin is about his time their living and working as an EU-UK citizen in a new country and the profound love he found and lost. It connects up to Jamie’s childhood to tell a story, set like a fantasy film, about oppression and emancipation, male sexuality, masculinity, and mental health. The full-length release date is yet to be announced with a further single release later in the year.

“I was full of anger that many of my friends who are international people living in another country from that of their birth, or mixed race, or dual nationality, were somehow considered invalid, not important, either by the UK government or by the almost half of the general population. I could see nothing but stupidity and danger in such a direction and I had to speak out. So together with the performers on the track and video, visual artists Stephen Williams, Darin Tufani, and Ukrainian video director Alexey Romanowsky we decided to make something to communicate a powerful positive message of Internationalism and international love. This in the hope to wake up people to what they will lose” 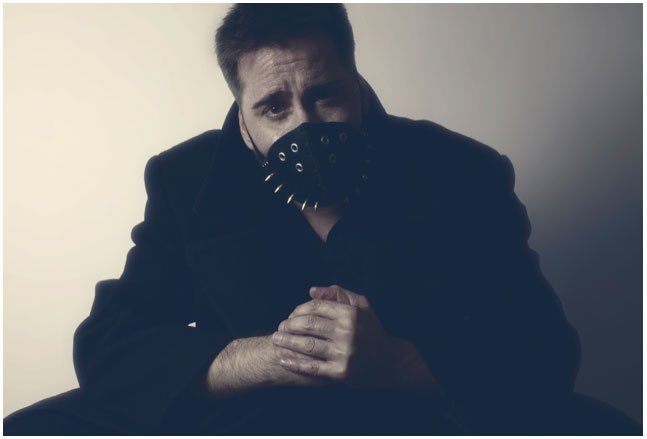 Recently collaborating and touring with Norwegian electronic duo Royksopp whilst finishing his third record in Berlin and Manchester, Jamie Irrepressible is a vocalist, composer, songwriter, and visual artist who has released two critically acclaimed albums (Mirror Mirror 2010, Nude 2012) and two EPs (From the Circus to the Sea 2009, and Nudes 2014) with his project The Irrepressibles. Jamie works with sound, music video, live performance and collaborations with other artists to make political emotional works that aim to communicate to a broad audience and incite change.

Born in North Yorkshire, England to working-class beginnings, Jamie began writing down the music he could hear in his head for the school orchestra inspired by progressive rock, early electronica and classical music. He later moved through various indie, punk and grunge bands either on guitar or vocals.

On discovering his sexuality, and being bullied, he focused on creating music that would express the beauty and uniqueness of homosexual love in a way that would illustrate it to everyone. Initially selling out small venues performing these songs alone on acoustic guitar in London before forming The Irrepressibles and expanding the songs with his orchestrations and arrangements at university in 2002.

The Irrepressibles From The Circus To the Sea EP released in 2009 reached the top of the Rough Trade in-store chart and finally engaged the interest from the UK music industry. Amongst 4 songs the EP featured instrumental music Jamie had created for a film by Scottish director Shelly Love, called The Forgotten Circus.

Their debut album Mirror Mirror (2010) - a fusion of Bowie-esque glam-rock,grunge, exotica, baroque music, and honest authentic songwriting - was at the vanguard of the recent ‘chamber-pop’ movement. Lead single “In This Shirt” became a viral phenomenon with a cryptic art-house LGBT video made by director Roy Raz extending the bands popularity internationally. The track has been used extensively in Film and TV with remixes made by Royksopp, Hercules and Love Affair and Zero 7. The album earned critical acclaim and the attention of many important figures in the music industry including Holly Johnson (Frankie Goes to Hollywood), Boy George, George Michael, Bill Drummond (The KLF), Tom Robinson, Amanda Palmer, and many more.

Visual collaborations with Jamie’s then boyfriend the artist JJ Stevens established a visual aesthetic that continued through the albums promotional life with the band collaborating with various fashion designers (Philip Traecy, Rachel Frier) and including costume creations by the then violinist Jordan Hunt. Jamie created what he called “performance spectacles” which he dreamt up with sets and lighting designs either built by teams or by Jamie himself and toured internationally throughout Europe which had an influence on the style of live performance at the time.

Jamie's second album Nude, was far more stripped back emotionally, released in 2012, it gained similar acclaim, both by the critics and his peers. A bold and radically honest homosexual record with imagery and music videos to boot, it challenged cultural norms in popular music and though the albums boldness lost them their deal before it was release, on release it had influence, the zeitgeist followed suit with artists making openly honest gay work lyrically and in videos. They were again at the front of a movement, and Nude’s success built in the years to come regardless of the initial bans on music videos they encountered from Youtube. The lead track ‘Two Men in Love’ was picked up and used by fashion designer /film director Tom Ford and shared by Madonna. The album also saw the band take their message of equality to Asia, Australia and the US performing challenging environments such as in front of 5,000 people in an open-air headline show in Moscow, Russia, and celebratory ones -performing the song for the first UK gay wedding.

As a vocalist and composer Jamie’s worked in much of the breadth of the music industry. From the Avant Gard: performing site specific works with his choir Conversations With Sound on tube trains, in tunnels and public spaces, to improvised works working with directors including David Toop (Flying Lizards). Through to scoring electro-choral music for critically-acclaimed touring opera ‘War Sum Up’ (Hotel Pro Forma/Latvian National Opera) who’d previously worked with The Knife on the opera Tomorrow in a Year. He’s also provided studio vocals for dance music working thus far with Royksopp, Ionnalee of iamamiwhoami, and Rex The Dog. Jamie has recently scored orchestral music for a forthcoming fantasy film release and has also begun working in the world of music production - arranging, recording, and mixing a first release for American indie alt-Country artist Jon Campbell, titled “About A Boy” which was released February 2016. Most recently Jamie has duetted with Swedish artist ionnalee of iamamiwhoami on the track Dunes of Sand released January 2017.