Noel Gallagher’s High Flying Birds today announce details of ‘Back The Way We Came: Vol 1 (2011-2021)’. Released on 11th June 2021 via Sour Mash Records, ‘Back The Way We Came: Vol 1 (2011-2021)’ is a definitive 18 track greatest hits package, and a timely reminder of the breadth & depth of classic songs from the first decade of Noel Gallagher’s High Flying Birds. The album is also available on limited-edition deluxe formats with a bonus disc including previously unreleased acoustic versions, remixes, instrumentals and an unheard demo.

There will also be a limited-edition numbered, hand-pressed, coloured double LP with exclusive art print released for Record Store Day on 12th June.

Curated and compiled entirely by Noel, the tracklisting of ‘Back The Way We Came: Vol 1 (2011-2021)’ encompasses songs from High Flying Birds’ three UK No.1 albums (‘Noel Gallagher’s High Flying Birds’, ‘Chasing Yesterday’ and ‘Who Built The Moon?’) and the three acclaimed EPs (‘Black Star Dancing’, ‘This Is The Place’ and ‘Blue Moon Rising’). ‘Back The Way We Came: Vol 1 (2011-2021)’ also features two brand new songs produced by Noel Gallagher & Paul ‘Strangeboy’ Stacey, ‘We’re On Our Way Now’ and ‘Flying On The Ground’. A songwriting masterclass that sits effortlessly in one of the great songbooks, ‘We’re On Our Way Now’ is unveiled today, a taste of the future-fan-favourites to come. Listen BELOW:

Since establishing Noel Gallagher’s High Flying Birds post the legendary success of Oasis, Gallagher has never sat still creatively. He’s mastered the art of embracing an instinctive sonic evolution and creative freedom whilst never neglecting the songcraft. From the New Orleans brass powered blast of debut single ‘The Death Of You And Me’ via the self-produced psych-pop and space-bound experimentation of ‘Chasing Yesterday’ and the disco saturated, sonic veer of ‘Who Built The Moon?’ (at the hands of renowned producer David Holmes) and the subsequent EP releases, Noel Gallagher’s High Flying Birds have proven time and time again to be unshackled by genre and expectation. That Gallagher has so successfully married this bold and blistering approach with huge commercial success (over 2.4 million albums sold internationally with three UK No.1 albums - marking a record-breaking ten consecutive UK No.1 studio albums across his career), coupled with relentless touring globally, is testament to Gallagher’s unerring ability to marry laser-guided melodies and fearless creativity.

“10 years of Noel Gallagher’s High Flying Birds?? Blimey! ... Just think of all the things I COULD have done in that time!!

"The title just came to me one afternoon, at the kitchen table. It's a saying isn't it: 'Back the way we came'. I actually thought it was a great title. Which is why it's got Vol 1. Because if there's another one, I'm not coming up with another title!"

Now with the best part of thirty years as one of the country's most respected and prolific songwriters under his belt, ‘Back The Way We Came: Vol 1 (2011-2021)’ celebrates another landmark in Noel Gallagher’s unparalleled career. 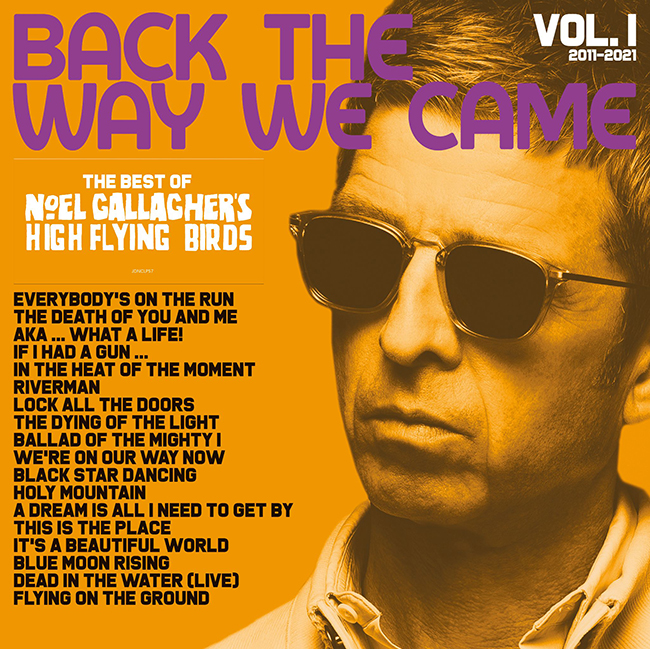 1. Everybody’s On The Run

5. In The Heat Of The Moment

7. Lock All The Doors

8. The Dying Of The Light

9. Ballad Of The Mighty I

4. This Is The Place

7. Dead In The Water (Live At RTÉ 2FM Studios, Dublin)

8. Flying On The Ground

5. The Man Who Built The Moon (Acoustic Version)

8. The Dying Of The Light (Acoustic Version)

9. This Is The Place (Skeleton Key Remix)

10. This Is The Place (Instrumental)

12. Be Careful What You Wish For (Instrumental)

Liam Gallagher’s third solo studio album ‘C’MON YOU KNOW’ (out May 27th) looks set to be one of the biggest album events of the year. Anticipation for the album was ignited with the lead single...

Live Nation today announced that U2 will return to select stadiums this year with U2: The Joshua Tree Tour 2017, in celebration of the 30th anniversary of the band’s classic album. Each show will include...

Marking the 25th anniversary of Definitely Maybe, ‘Listen Up’ is brand new podcast series offering an eye-witness account of the remarkable events leading up to and following the release of Oasis’ iconic debut album. The...