Tickets €69.75 including booking fees go on sale Friday 1st March at 9 am.

Mumford & Sons will also perform a headline show at London’s Victoria Park this Summer in a special collaboration between All Points East and their own Gentlemen of the Road events on Saturday 1st June.

Joining Mumford & Sons in London will be Leon Bridges, who also preceded the band in Auckland’s Western Springs back in January, Dizzee Rascal, old friends The Vaccines, BRITs Critics Choice’ winner Sam Fender, Dermot Kennedy, Jade Bird, Australia’s Gretta Ray, and Canadian newcomers, Dizzy. Many more artists will be announced in the lead-up to the event.

In November 2018, Mumford & Sons released their acclaimed fourth album, Delta. Debuting at number 1 in the US for the third time in the row, it’s a record that marries a more experimental sound with that vast sky-scraping jubilance that has made the band such a massive deal right across the world.

Gentlemen of the Road is an endeavour of Mumford & Sons which produces community-minded touring Festivals. With a commitment to giving back to the causes the band are close to, Gentlemen of the Road & its Fund will be supporting global charities, local programs, urgent needs, and will always do what it can to protect the planet. Having already taken GOTR around the globe with weekend Stopovers in England, Ireland, the US and Australia, each and every event puts due prominence on the town or city they arrive in, ensuring the local community are as involved with its planning as they want to be and offering a spotlight on the locale to a huge audience.

Following a handful of arena shows around Delta’s release, Mumford & Sons will now emphatically return to the live stage in the UK and Ireland for the Summer. 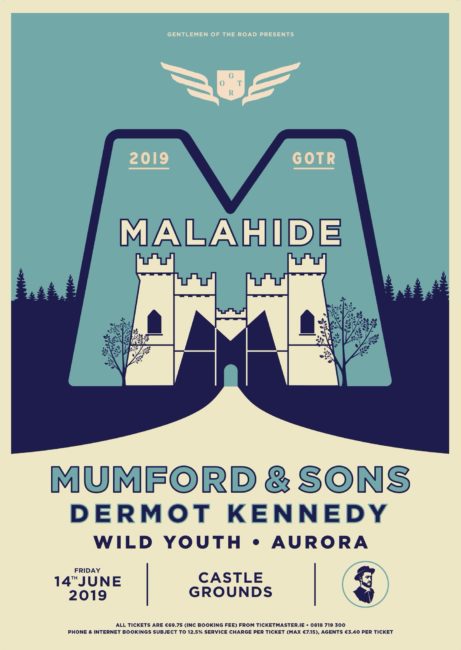 Common wisdom was never going to suit Gretta Ray. Her first release of 2021 introduces an innovative concept in new music sharing: Duologies — two songs joined in theme but creatively distinct, issued as a […]

The Cure have announced Ride, The Twilight Sad and just mustard to line up for Malahide Castle

The Cure has announced Ride, The Twilight Sad and just mustard as special guests for their sold-out show in Dublin’s Malahide Castle on Saturday 8 June 2019, subject to licence. The Cure, who return to […]

Sam Fender is very pleased to share his cover of Amy Winehouse’s Back To Black. It is streaming now. The track was initially recorded live on Radio 1 earlier this year as part of their […]