Everyone knows or has one; a scatterbrain who would literally lose their head if it weren’t screwed on to their body. The reader through “Moonhead and the Music Machine” gets as close to finding out what would happen if someone’s head was not literally attached to them. Andrew Rae brings to life Joey Moonhead, a teenage boy who literally has a moon for a head which is not literally attached to his body. Although it does not specifically say; one would best describe Joey’s head in relation to his body as wireless or cordless.

We are introduced to Joey who is unique and despite not being focused on school or life is exceptionally talented. He wakes up, brushes his teeth, gets dressed and packs his school bag correctly without the use of his “Moonhead”. It is only when Joey gets to school that he realises that he has left his “Moonhead” at home in bed. Fear not, Joey’s head moves like a bullet train to reunite with its body.

Whilst the idea of a teenage boy having a Moonhead may seem fanciful, unfortunately for Joey, his quirks and unique talents are neither celebrated nor respected; he is bullied for being different. Joey is called “crater face” and Joey’s body is often piggy in the middle whilst his tormentors throw Joey’s head as a ball to each other.

Joey is a literal daydreamer. His daydreams have taken him “to the end of the universe… or the depths of the sea… or the heart of the jungle…” He also daydreams about Melissa, a blonde popular girl he has a crush on who is going out with lead school bully Doug. Fortunately for Joey, he has some companionship in the real world; he has a best friend at school, an academic girl with thick black-rimmed glasses and thick black hair in a 1960’s bob style called Sockets. 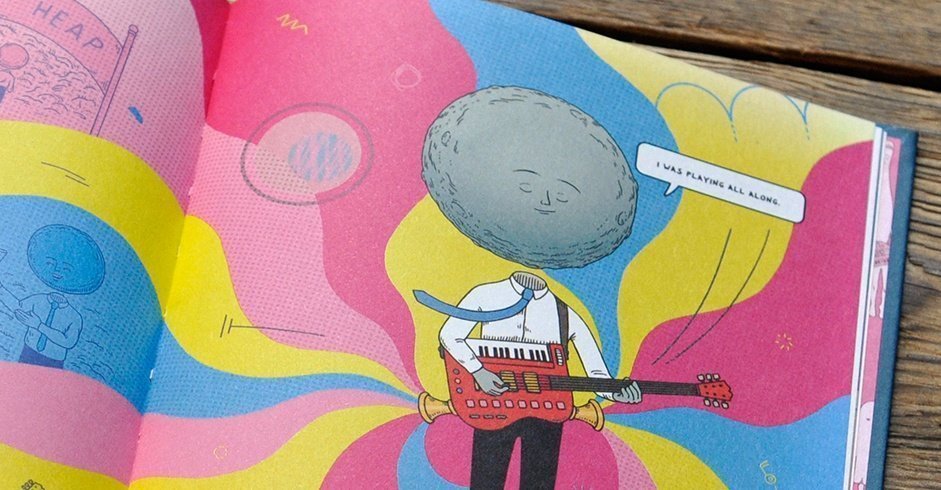 Joey’s absentmindedness eventually catches up with him when he receives a poor parents evening report. As punishment Joey is sent to the spare room so he can’t read his comics. Whilst our adolescent Moon headed protagonist is prone to escapism; he is not aimless. Joey wants to “start a band or something and tour the world”. It is in the spare room where Joey is able to take the first steps into making this dream a reality. He discovers something far more practical than a magic wardrobe; an old but working vinyl player, a box of classic vinyl records and headphones to listen to vinyl. Upon listening to the fictional vinyl classics by Captain Meathook & The Magic Markers and Owen and the Eyeballs; Joey draws a sketch of a prototype of a musical instrument he intends to make.

The power of music changes people’s lives for the better. Joey becomes more proactive. The next day he went to school and asked his teacher if he could work on his guitar in the school workshop. Once granted permission; Joey begins building immediately. Progress is slow but things start to come together with the help of Ghost Boy from Class X. The resulting “Music Machine” that is built is amazing; part guitar, keyboard and trumpet. The graphic novel illustrations give the instrument the full praise it deserves.   Joes gets Ghost Boy to reluctantly join him as part of his band to enter the school talent show with him.

When Joey is eventually part of a full band which includes his friend Sockets, a grade nine pianist; they joke about the cover versions they could play which include “Moon River”, Moon Daze” or “Blue Moon”. As well as enjoying the light-hearted escapism this book has to offer; one will unconsciously recall every album with the word “Moon” in it. If non-fictional LP’s were included; it is highly likely that The Rolling Stones’ Havana Moon, Pink Floyd’s Dark Side of the Moon and Air’s Moon Safari would have featured. 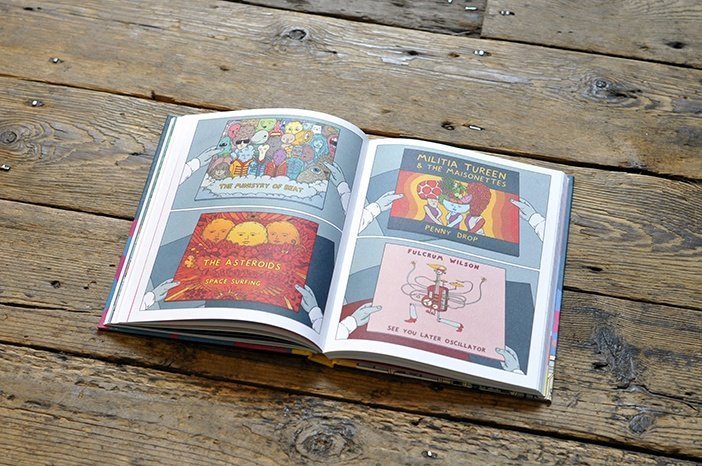 The elegant use of colour is mesmerising as Andrew Rae throughout “Moonhead and the Music Machine” illustrates the beauty of bright pinks, yellows, blues and reds when they contrast with darker greys and various shades or turquoise. The relationship between the dialogue and illustrations is harmonious. Whilst the artwork is the main star with the lion’s share of the script; the occasional use of words aids the illustrations to tell the story about Joey Moonhead without being overly verbose or cantankerously laconic.

To own a copy of Moonhead and the Music Machine (where no part of the book will float away) please visit https://nobrow.net/shop/moonhead-and-the-music-machine/