Legendary US vocalist Geoff Tate and his Operation Mindcrime band return to Belfast at Limelight 2 on Sunday 24th May 2020 as part of their Empire 30th Anniversary Tour. Tickets are on sale now from all usual Ticketmaster outlets.

The band will perform TWO classic albums in their entirety, EMPIRE and RAGE FOR ORDER, for the first time ever on these shores.

Rage for Order was more progressive than the band's previous releases, with a layered and complex musical structure that employs a two-guitar approach but also brought keyboards forward in the mix. Lyrically, the album explored social/personal, political and technological themes, among others highlighting the dangers of artificial intelligence and government intrusion.

Empire is the fourth full-length studio album by the American heavy metal band Queensrÿche, released on August 20, 1990. The album stands as Queensrÿche's most commercially successful release, reaching triple-platinum status[7] and the primary single, the power ballad "Silent Lucidity", reached number 1 on the Mainstream Rock Tracks and number 9 on the Billboard Hot 100. "Silent Lucidity" was also nominated for the Grammy Awards of 1992 in the categories Best Rock Song and Best Rock Vocal Performance by a Duo or Group. 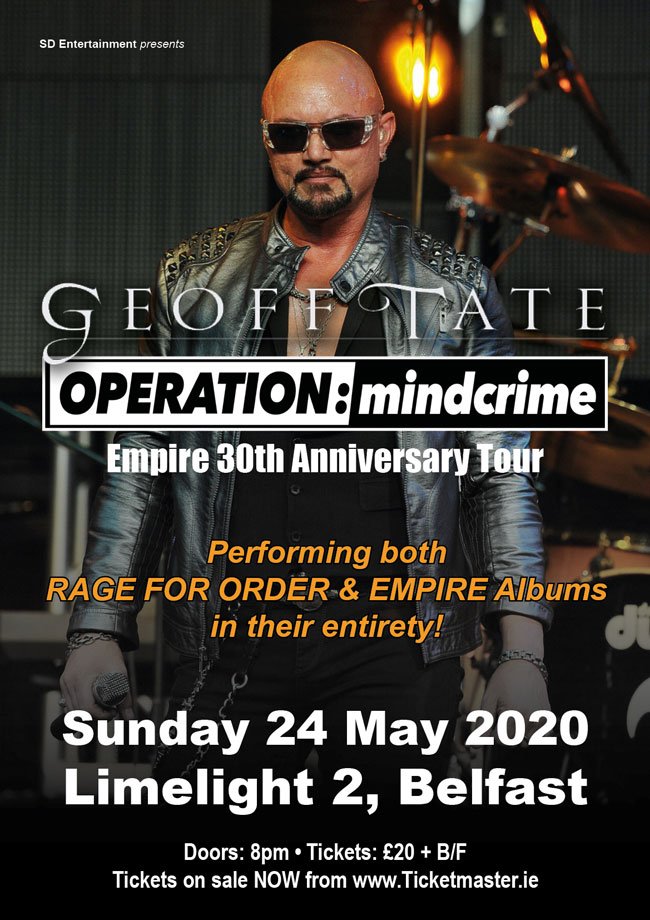 Fans clamour for a Geoff Tate show and has been a regular in Belfast since 2016 with all gigs extremely well supported. Geoff himself loves Ireland and frequents County Cork a lot these days with his wife and family.

This will be a very special show for Geoff Tate fans and tickets are now available, just in time for Christmas, priced £22.50 including booking fee and available from Ticketmaster.ie and all usual outlets including Katy's Bar.

Twenty-two-year old singer/songwriter Odhran Murphy might be something of a hidden gem within the local music scene – but not for long. Fusing folk and pop, Odhran’s musical ability, raw passion and soulful voice bely...