Hot on the heels of releasing their acclaimed new album One Day At A Time, Kodaline have announced news of a huge outdoor show for next summer at Malahide Castle on June 27th 2021.

Tickets priced €49.20 are on sale now via Ticketmaster. Subject to licence.

'2020 Has been a weird and tough year for everyone and in terms of live shows, it’s been a total write off. We can’t wait to play this show for you guys, we only wish we could play it sooner, see you all in June next year at Malahide castle. Until then stay safe and stay healthy'.

‘One Day At A Time’ is the band’s fourth album, and adds a new chapter to a career that has already encompassed three #1 albums in Ireland, two Top 5 albums in the UK, and more than a billion streams at Spotify.

Kodaline approached the album with a streamlined process that took them back to their roots. The majority of the sessions revolved around the four band members alone in their modest recording space in Dublin, with bassist Jason Boland leading the production side of things.

The band’s primary objective was to focus on the emotion that has informed many Kodaline fan favourites. As we’ve seen from the two recent singles, they’re playing to their strengths: insistent melodies and captivating hooks exploring stories that are revealing, unguarded and immediately relatable.

“The main thing this time was to capture those emotions through everything,” says frontman Steve Garrigan. “We also wanted to use a lot of harmonies and play to our strengths.” “Our music is now as emotional as it can be,” adds drummer Vinnie May. “We’re really confident and optimistic about this record.”

In addition to the three singles, the album’s highlights include ‘Spend It With You’, the tale of a couple who vow to stay together as the world hurtles towards its final apocalypse; a beautiful celebration of the ups and downs of relationships in ‘Care’; and the concluding arena-scaled drama of ‘In The End’.

In 2019, Kodaline played some of the biggest shows of their career. At home in Dublin they sold-out two huge outdoor shows at St. Anne’s Park, while a ten-date UK tour culminated with a packed show at London’s historic Roundhouse. Further afield, they hit festivals including Lollapalooza, Benicassim and Open’er before becoming the first Irish band to headline the Massive NH7 Weekender in Pune, India.

ALL TICKETS FROM POSTPONED OLYMPIA 2020 SHOWS VALID FOR NEW DATE 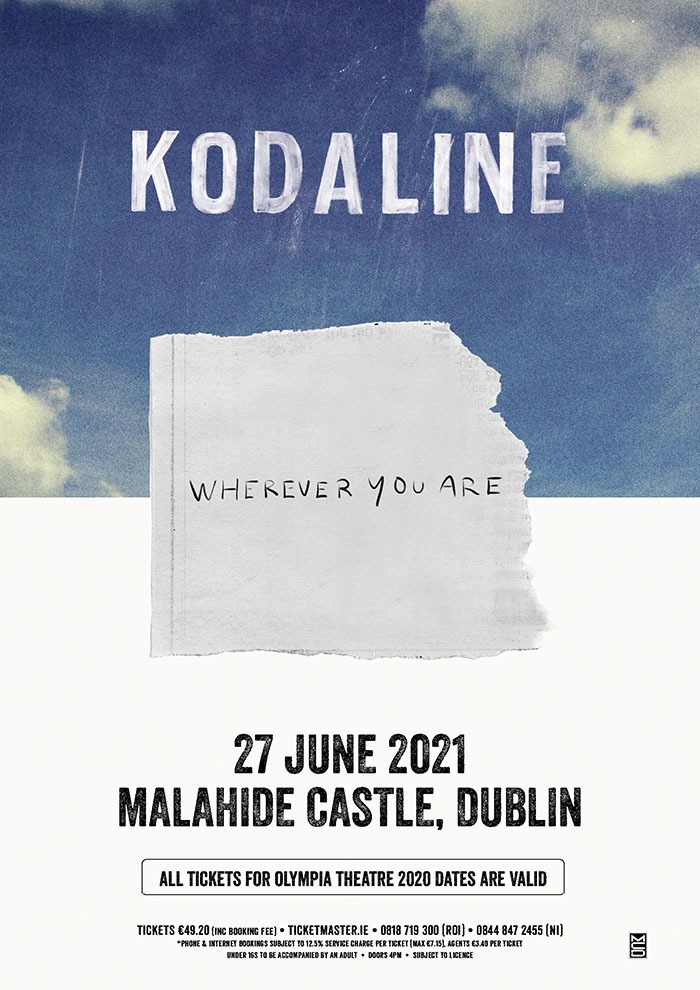 Kodaline announce a BELFAST show rounding off another hugely successful year for the multi-platinum selling band. Kodaline released their second album ‘Coming Up For Air’ in February, topping the Irish album charts. Drawing inspiration from...

Adorned in black with bright ruby-red shoes, and despite this being his first European tour; American solo artist, Patrick Martin, received a tremendous round of applause from the sardine-packed, yet ecstatic, Roundhouse. Despite Martin’s youth...