Longitude returns to Marlay Park this summer from Friday, July 2nd to Sunday, July 4th 2021. The first round of acts are as follows.

Kendrick Lamar will headline the Friday night of Longitude. Indisputably the most acclaimed artist of his generation, Kendrick Lamar is one of those rare MC’s who has achieved critical and commercial success while earning the respect and support of those who inspired him.

On Saturday, July 3rd Tyler, The Creator leads the line-up. The rapper and producer surfaced as a founding member of Odd Future, an outlandish alternative rap crew that gradually permeated the mainstream as it began a multitude of related projects. His most recent album Igor has been met with universal critical acclaim and debuted at No 1 on the US Billboard 200.

A$AP is back! We are delighted to announce that A$AP Rocky will close the festival on Sunday night. His debut album, Long.Live.A$AP, landed in 2013 and featured the single “Goldie.” The album A.L.L.A. (At Long Last A$AP) followed in 2015 and debuted at number one. His third solo album, Testing, arrived in May 2018, opening at #4 on the Billboard 200.

And many more to be announced…

All ticket prices are inclusive of the booking fee

Tickets on sale Friday, December 4th at 9 am

Three customers can get their hands on Longitude tickets before anyone else, presale tickets go on sale at www.three.ie/3plus on Wednesday, December 2nd at 9 am, 48 hours before general release. 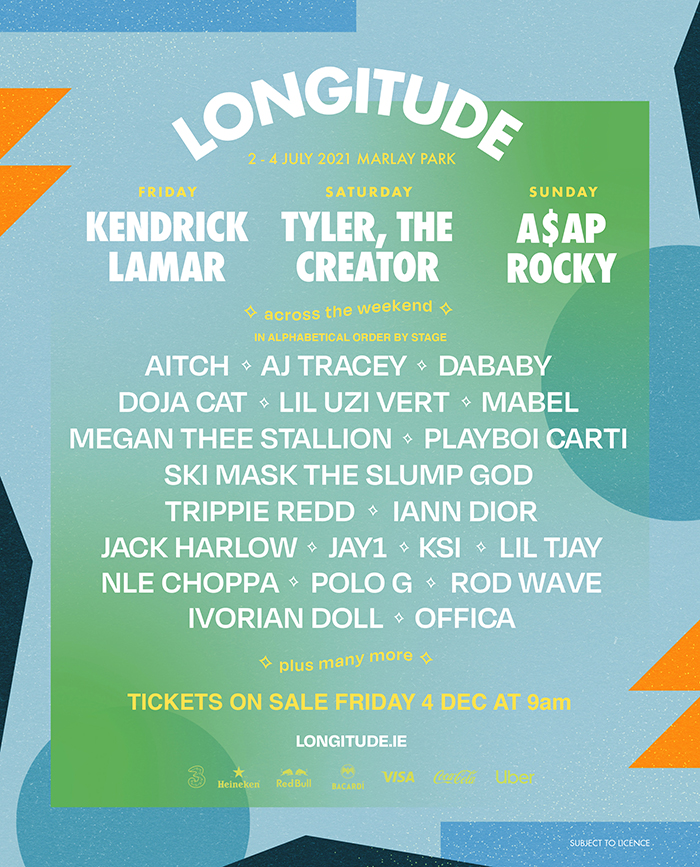 Longitude returns to Marlay Park this summer from Friday, July 3rd to Sunday, July 5th 2020. The first round of acts are as follows. Kendrick Lamar will headline the Friday night of Longitude. Indisputably the […]