One of Britain’s most beloved bands, Keane are back with a Belfast Waterfront show on Monday 07th October 2019. Keane has announced a brand new album named ‘Cause and Effect’ out September 20thon Island Records and featuring the powerful first single ‘The Way I Feel’.

After months of speculation, Keane, one of Britain’s most beloved bands are back with a brand new album out September 20th on Island Records and featuring the powerful first single ‘The Way I Feel’.

Written by Keane and produced by David Kosten and the band themselves, ‘Cause and Effect’ features 11 new songs recorded in London and Sussex.

Keane have also announced a major UK tour this autumn including two nights at London’s prestigious Royal Albert Hall. The band will play a series of festivals this summer including BST in Hyde Park on July 14th.

‘Cause and Effect’ is Keane’s 5th studio album. Their 4 previous albums have all entered the UK charts at number 1 and accumulated sales of over 13m worldwide and 2.6 billion streams.

The birth of this new album came as something of a surprise even to the band. Singer Tom Chaplin had released two successful solo albums but missed his old sparring partner Tim Rice-Oxley. “I found myself wondering how I had come to let this very enigmatic and important relationship in my life drift,” Tom says.

Meanwhile Tim found his life falling apart and from the ashes had written an album’s worth of incredibly personal songs fuelled by humour as well as pain.

When Tom, bassist Jesse Quin and drummer Richard Hughes heard the songs, they were immediately drawn to them both sonically and lyrically.

“Hopes and Fears was a break-up album too, but it was about a break-up when I was 19,” Tim explains. “It’s a bit different when you’re older and you’ve got kids – your whole little world shifts on its axis.”

They play the following dates: 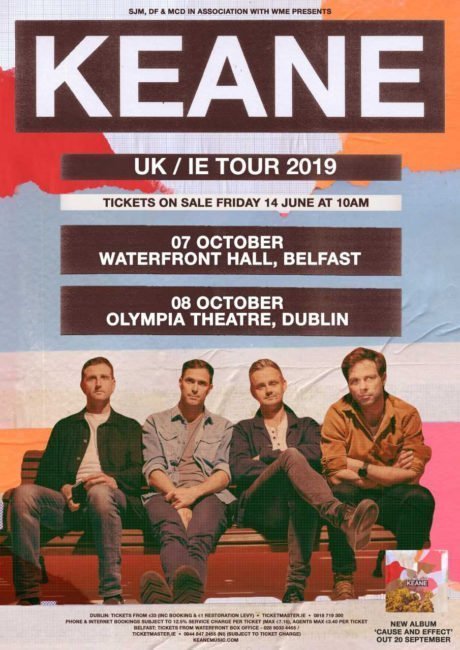 The video for ‘The Way I Feel’ was directed by Kevin Godley, who previously directed the video for the band’s hit single ‘Is It Any Wonder’ and Tom’s solo release ‘Still Waiting’.

‘The Way I Feel’, like the other ten tracks on ‘Cause and Effect’, is an emotional and remarkable slice of life, and reminiscent of the very best of Keane. It’s an exciting period for one of the country’s best bands and a very welcome return.

As Tim Rice-Oxley says, “We’re not some heritage act. We’ve got a lot of great music in us.”

‘Cause and Effect’ is just that.

The tracklisting for ‘Cause and Effect’

Tickets on sale Friday June 14th at 10am from Ticketmaster outlets and www.ticketmaster.ie, www.waterfront.co.uk and Ulster Hall Box Office

Tom Chaplin releases ‘Quicksand’ the first single from his powerful solo album ‘The Wave’ out October 14th. Written by Tom and produced by Matt Hales (Aqualung, Lianne La Havas), it’s one of many album highlights. […]

KEANE Return With New Album, ‘Cause and Effect’ out September 20th

After months of speculation, Keane, one of Britain’s most beloved bands are back with a brand new album out September 20th on Island Records and featuring the powerful first single ‘The Way I Feel’. Watch […]