Irish singer-songwriter JC Stewart has announced his biggest Belfast headline show to date at the Ulster Hall on Thursday 02nd September 2021. JC’s ability to make a connection is quickly winning the hearts of fans and influential supporters alike as he approaches two million monthly listeners at Spotify. Radio 1 has emerged as a key backer, resulting in a playlist for Lying That You Love Me and a live performance for their virtual Big Weekend.

Apple Music also tipped him as a rising star, when they named him as their new artist of the week. And the scenes he orchestrated his London residency have been repeated with shows as guest to Lewis Capaldi, Lauv, Anne-Marie, Maisie Peters and Freya Ridings as well as an MTV Push event alongside Yungblud, Raye and Lily Moore.

Something you notice immediately about JC’s songwriting is its ability to express deep emotion and universal truths in language that is consciously direct and uncluttered. Is he as good at doing that outside of a song, in everyday life? “No, I’m terrible,” he chuckles. “Actually, I think I’m bad at doing it in a song sometimes. The best of my songs are the ones where I genuinely do it; but a lot of the time I find it really hard to get there. You circle round it but you never quite catch it. I’ve got so much stuff going on in my head. Take for example, The Wrong Ones is a song I wrote after a year of failed attempts at finding “the right one”. It’s essentially an account of the different people I came across and at the end wondering if actually maybe I was the issue the whole time.

While his lyrics often hone in on the devastating minutiae of faltering relationships (both I Need You To Hate Me and Have You Had Enough Wine? tackled different stages of the same break-up), JC’s quick wit and self-deprecating sense of humour are immediately apparent. Those personality traits also resulted in him going viral on a global scale.

Bored during lockdown, JC filmed his quarantine-themed take on the Friends theme song I’ll Be There For You, singing, “It looks like we'll be inside for a year/ Or it might only be a day, a week or months it's really not clear.” It exploded after Jennifer Aniston shared it on Instagram. Suddenly it was featured on Good Morning America, and Nina Dobrev also shared it with her 20 million followers as it raced to five million views.

JC kept his profile riding high throughout the remainder of 2020, collaborating with 220 Kid for Too Many Nights, before he released his long awaited debut EP When The Lights Hit The Room. He wrote the EP with the BRIT and Ivor Novello Award winner Tom Odell, and together they crafted four emotive stories of the growing pains of young adulthood. He now looks set to become one of 2021’s biggest breakthrough artists, starting in January with the boldest pop moment to date in the shape of the new single Break My Heart.

It’s clear that JC was born to do this and knows exactly how to play to his strengths. “The whole point is to make it quite big and epic,” he concludes, “but at the same time, I’m from a farm in Northern Ireland, so I want to keep hold of that too. I’m writing songs, and I’m doing my own thing.”

Tickets on sale Friday, May 21st at 10 am via www.ticketmaster.ie and www.ulsterhall.co.uk 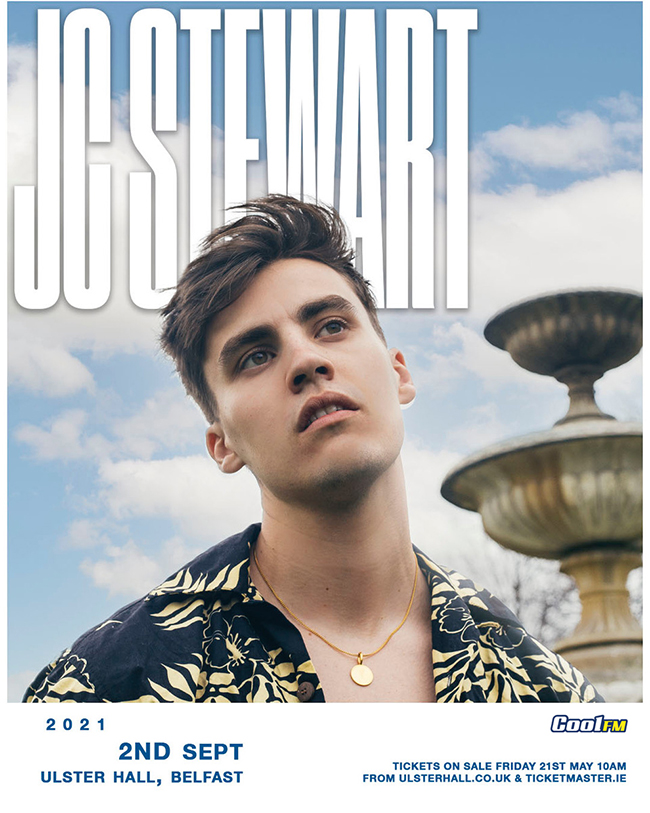 The Strokes became hard to see at just the moment that they became hard to listen to. Their two early 2010s offerings, Angles and Comedown Machine fell a long way short of capturing what had...

Eagles Of Death Metal have announced their 24th Anniversary Tour with a headline Belfast show at Limelight 1 on Sunday 28th November 2021. The 12-date, two-week leg of the tour will hit such cities as...

INTERVIEW: Ali Barter - "I had to come to a place where I was happy with myself before I came back to music"

Two years on from her blistering debut 'A Suitable Girl,' Australian singer-songwriter Ali Barter has announced her triumphant return with 'Hello, I’m Doing My Best' - a revealing collection of songs that track her most...