Brimming with industrial new wave savours, electro-pop, and psych-rock, MAMN’s “Mad World” shimmers on washes of gleaming colours topped by Mea’s dreamy, lysergic timbres, as if emanating from throats of the Moirae of Greek mythology, who directed the destinies of all living beings.

Destiny is a fragile concept in today’s world, where the future shudders and trembles hesitantly, wondering if tomorrow will come at all.

The video opens with shots of jack-booted police officers dressed for battle and then shifts to masked figures, followed by Mea strolling down the deserted strip in Las Vegas. Images of hurricanes, vicious wildfires in California, and melting polar ice caps infuse the visuals with the endemic chaos of a world sinking deeper and deeper into the morass of madness.

Yet through it all, there’s a ray of hope and light – love. No matter how horrible circumstances become, Mea jogs the memories of viewers/listeners with the omnipotence of compassion. XS Noize spoke with Mea Fisher to discover how she got started in music, what motivated her to cover “Mad World,” and what’s next for Me And My Nightmare. 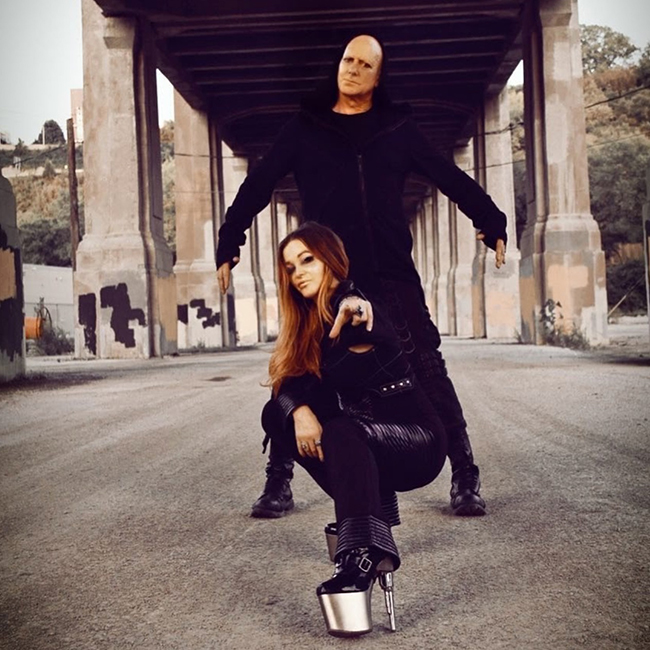 How did you get started in music?

My grandmother and father were avid musicians, so I think it runs in the family, but it wasn’t until I saw Nine Inch Nails for the first time was when I knew what I wanted to do for the rest of my life.

What’s the backstory there?

I was running a retail store in Kansas City, and my boyfriend was a vinyl DJ, so I was introduced to house music. When we broke up, I started deejaying and eventually moved to Chicago and started my DJ career as a freestyle singer, then eventually moved to LA and started a band which ultimately led me to be one of the frontwomen of Lords Of Acid where on the 2017 tour I met En Esch from PIG/KMFDM. We started collaborating for MeAndMyNightmare right after the tour ended, and it has been a work in progress since. We are ready to release a beast of music now!

The band is a collab of amazing artists, but most songs are from my brain and only get to fruition by collaborations with others that can vibe with the ideas. En Esch and I created over 10 songs after we finished touring, and I asked him to lend his voice to several of mine I had already completed, which made them so much better IMO. It was a beautiful journey, and I am grateful we met and were able to do the creation process before the virus. We both play keys and guitar; Galen Wailing from Lords of Acid lends his drums to everything, and Chase the Wave just came on board to do some needed tweaks to one of our next singles... he is the newest of the MAMN crew. Most known for being the bad-a$$ shredding guitarist from Nine Inch Nails, Danny Lohner lends his guitars to a few, so does Lonny Johnson from Adler’s Appetite. Neil Mclellan, most known for his work on The Prodigy albums, co-produced some songs and brought in legendary Matt Robertson for the string section orchestra to one of our songs - he is Music Director to the iconic Bjork who happens to be my idol. Also, we have remixes from so many... one of my favourites is from Joseph Ray of Nero, who remixed a song I wrote about my mother and her struggle with Alzheimer’s. It’s beautiful.

So, like I was saying earlier, it’s a collab of talented people that I think are amazing artists who know how to vibe with the songs and know what they can bring to it to make it better.

What’s the story behind the name Me And My Nightmare?

I used to have a band called MEANDMYMACHINE, which the first three letters were my first name, so my genius friend Bryant suggested MeAndMyNightmare since it does the same thing but is a fresh new name. At first, En Esch said no. But once I showed him some cool artwork of it with the band name written in a messy, handwriting font and had a big, scary monster behind a little girl with pigtails, he was all in.

Depends. Sometimes it just comes as I piece things together. Sometimes I have a certain song in mind that I want to have a similar feel to it. Regardless, I always start with the drums and build from there; my Nord Lead keyboard and all of my Native Instruments plugins play a big part, and I use LogicX to make it all. When En Esch came to produce with me for a few months, he gave me a few handfuls of some samples of his ideas, and I picked what I thought I could do something to and also gave him songs I had that were already close to completion so he could add the finishing touches to them by lending his voice.

It was refreshing to work on someone else’s art because it just kept flowing for me. Sometimes I get so sick of something I write and go on to something else and shelve it. It amazes me how many of those I have, and I hope to get to all of them someday. Collaboration is key.

What motivated you to cover “Mad World?”

Well, it’s an incredibly awesome original by Tears For Fears, and it just happens to be a very mad world these days. I wanted a cover song people could relate to and were familiar with as a first song for the band. Then, the originals can follow.

So many people, lands and animals are suffering, and I tried to harness some issues in the video, but I didn’t touch on a few due to the graphic nature of them, but my goal was to try to show no matter how bad things can get, love always wins. I tried to show a positive to all the bad. I had the video in mind before the song was finished.

What do you hope your fans/listeners take away with them from the video?

I want people to have hope regardless of all the problems the world faces. I want them to keep going as long as they can breathe. No matter how bad or hard life can be, always have faith that things will be ok, and that love will always prevail. Never quit, always follow your heart, believe in your dreams and have hope for a better day. Try to do your part, be part of the solution and not part of the problem. Be kind to others and Mother Nature, and please recycle.

Do you have guilty music and/or entertainment pleasure?

I meditate to music that most people would mosh to. I can’t explain it other than it makes me feel better every time.

It runs in my family; it’s in my blood, and it’s the coolest thing ever. I love editing and learning new tricks on stuff that I took the long road to do and now can do in a few clicks... I learn something new almost every day, and it’s exciting. The more I produce, the better the music has gotten, and it has been a long road to get to the point where I am finally happy with the results. If it’s not right to me, it’s not coming out until it is, or I shelve it.

How are you handling the coronavirus situation?

It’s been hard. I can honestly say that this last year has been the longest, toughest year of my entire life. I never worked harder for anything or anyone to save my family, finding a solid house to keep them safe in after searching in 3 states, trying to maintain my online retail business without having to close doors and continuing to finish making music all while staying as isolated as possible and remaining virus-free. I am finally fully vaccinated and so very grateful that we have made it through. I’ve taken the time to do songs that needed to get completed, and now I’m ready to release this beast of a collection. I really worry about En Esch, he is in Germany, and it is very bad over there and in so many other places. I’m sad that some still don’t care and don’t feel they have a responsibility to others to practice safety measures, so I’m trying to do everything I can to survive and always reminding others to wear a mask, wash their hands, get vaccinated, etc... and pray that it will be a thing of the past even though we’ll need the vaccine every year from now on (which is disconcerting), but it is what it is. As long as it saves lives, I think we will be ok in the near future. Hope hope hope.

Looking ahead, what’s next for Me And My Nightmare?

MAMN is waiting for our album release, along with some great music videos that we hope will blow people’s socks off. Our “Mad World” cover song took 1 day to do. Wait till you hear what has taken oh so much longer. The original music we are about to unveil will be insane. There is not a genre that I can call all of it. We have to figure out still what we want to select our genre to be... John Lennon said it best... When a reporter asked him what genre the Beatles were, he answers back with full sincerity, “Music.” There isn’t only one genre; it is neither here nor there. It is everywhere. It’s just music of great diversity, and that’s the beauty of it. Hopefully, there is something for everyone, and it appeals to not just one certain group but to as many as possible. I hope that the hard work we have done to perfect these songs will be enjoyed and that they help people in some way or another. It was made for the world. I care about making people feel good.

Please stay tuned by going to meandmynightmare.com for upcoming announcements... Touring will start as soon as the world opens up. It will be a visual and audio ultimate experience that will not disappoint. We are all so ready to get out there and kill it.

Following a sold-out summer arena tour highlighted by their triumphant UK return in front of 65,000-plus fans as special guests of The Killers during British Summer Time Festival at Hyde Park, Tears For Fears –...

After a triumphant concert on Radio 2 last night and with a sold-out show at The Royal Albert Hall to come this evening, Tears For Fears announce plans for their first UK and Ireland Tour...

Tears For Fears are back! The dynamic duo will play two nights at Hampton Court Palace, as well as Blenheim Palace and a Forest Live gig at Delamere Forest. Having sold 30 million albums worldwide,...