Teenage Wildlife traces the band’s recording career from exuberant debut Jack Names The Planets through to the likes of BuzzKill from 2018’s top twenty album Islands whilst also including a brand new offering Darkest Hour Of The Night alongside thirteen Top 40 singles such as Girl From Mars, Gold Finger, Oh Yeah amid an array of the band’s recorded history. Mark Millar caught up with Ash frontman Tim Wheeler to look back on 25 Years Of Ash.

Hey Tim, ASH release Teenage Wildlife: 25 Years Of Ash on 14th February 2020. Can you believe the band has been around for that long?

Looking back, what was the catalyst that made you, Mark and Rick form Ash?

We wanted to find a way to escape normality from early on, and we loved music. In the early days, we were really into heavy metal and stuff like that just before we started Ash. So even back in those days, we loved the idea of the life we could have being in a rock and roll band - it seemed a great way of escaping an ordinary life.

Ash recorded the mini-album ‘Trailer’ while still at school. How did your teachers and school friends react to the bands growing popularity?

There was a couple of teachers who were very cool about it, and then other ones were fine as long as we still did our homework. Only our cool friends knew what we were up to - the ones that read NME had an idea, but anyone who was a mainstream music person would not have realised, so we kept it quiet. I remember one half term we went off to LA to meet record companies, and only our closest friends knew that we had been off doing that.

What was the first Ash gig and can you remember how many people were there?

It may have been in the Penny Farthing in Belfast - we played there quite a few times in the first couple of years. I found an old interview recently, and it sounded by the end of it, we were getting tired of playing there because we were always playing to the same mates over and over. But it was definitely a really good place to start.

Ash broke through with your brilliant debut album ‘1977’ What can you remember about recording the album?

We recorded a few of the big songs early on in 1995 - they were Kung Fu, Girl From Mars and Angel Interceptor. We recorded those songs separately for singles in that year, so we already had a few hits under our belt when we went in to record the album properly. We didn't have many songs when we started in the studio, so we were writing as we went along. I had Gold Finger, and the chorus of Oh Yeah, I think. I remember the session was like making up the record as we went along, under a lot of pressure. It was our first experience at a residential studio, and we had a bit of time. Trailer was thrashed out quickly, but with 1977, we had a bit more time to experiment. We were with the producer Owen Morris who produced Oasis, and he was teaching us a lot as we went along. It was exciting, and we knew we had some big hits, but we felt pressure to write some more.

You were young guys on the road for the first time. What sort of mad antics did you get up to?

We were drinking a ton, and partying with all the new friends we were meeting around the world - it was pretty full-on in the first year and a half. The schedule was crazy - we were either hungover doing a ton of interviews, or else on stage, or off in van or a bus or a plane. We were pretty exhausted by the end of it.

Teenage Wildlife: 25 Years Of Ash is quite a compilation of your work. Of all the songs on the album which one means the most to you?

I guess some of the early ones that we have played millions of times - they are in our DNA. I am kind of excited that the album allows us to draw people's attention to some of our favourite things that we have done, but maybe aren't as well known, such as stuff from the A-Z series, and tracks like A Life Less Ordinary - that wasn't on an album, so it's good to have it amongst all the other tracks.

The compilation includes a brand new track ‘Darkest Hour Of The Night’ What can you tell me about the genesis of that song?

We recorded it for a new album actually, and then the label wanted us to do this compilation, so we figured it was a fun single to include on the album. We do have other stuff that has the classic Ash sound, but we thought it was more interesting to put something on that is a bit different. So far, it's been going really well and it's been getting a lot of radio play - it's good to have something fresh on there, so I'm glad about that.

How did you feel about Ash being lumped in with the Brit-pop scene?

It didn't feel great I guess - any band in a scene never wants to be part of it. It felt a bit weird because we were much more influenced by American stuff than all the Brit-pop music. It definitely worked in our favour when we went to Japan and Germany for the first time, because they are really big into their scenes, but we didn't really feel right being part of it - it kind of annoyed us a bit. But anyway, we were definitely lucky to be involved in a boom in guitar music and getting into the charts - we probably wouldn't have got on Top of the Pops if it wasn't for a music scene going on.

You made a slasher movie featuring Coldplay called ‘Slashed’ - will it ever get an official release?

It would be fun, but it just never got finished - we would need a time machine to go back and really finish it. For the 25th anniversary gig a while back, Mark did a screening of it where he showed sections, and whenever there was a gap, he was explaining what was going on in the gap - so that's the closest it's gotten to ever be seen by anybody. There will never be a complete version, unfortunately. We were on tour at the time doing a lot of support slots in America, trying to make it over there. It kept us out of mischief in some ways.

You guys are big Star Wars fans. What is your opinion on the final trilogy?

Personally, I liked the last film the best out of all of the films. I know Mark loved it, and Rick particularly hated the second one I think. So it's mixed reviews across the team.

To celebrate 'Teenage Wildlife: 25 Years Of Ash' the band will be embarking upon a tour in February. What kind of show do you have planned?

I guess we will play all the hits, and I would like to find an interesting order to play them in - maybe like reverse chronological order. Just something a bit different, but it's still to be decided. We are just going to be playing a lot of bangers hopefully.

You are playing a solo instore in Belfast the day after the release of the album. Are there any plans for a full band show in Belfast anytime soon?

Yeah, we're still working on it. We have been hassling our agent to get the Irish dates together - I think we are close to announcing something soon. Our agent always books other tours, and then adds the Northern Irish dates later on. We always get a lot of stick for not announcing them straight away - equally, we are just as annoyed because we want to get home to play. It's good that people complain because it gives us ammunition to tell our agent. Our agent is from Belfast also, so he should know better. (Laughs)

How do you spend your time when you aren’t touring or recording?

I live in New York where we have our studio, so I tend to go there every day. My other main hobby is Muay Thai boxing, so I train quite a lot when I have free time, and I have been to Bangkok and trained there a few times as well. So I'm either making music, doing Thai boxing, or going out drinking with my mates.

Looking back on the band's career do you have any particular highlights?

That is tough - maybe around the year 95 or 96, doing all that stuff for the first time, and everything getting bigger every year with everything we did. When 1977 got to number one, it was way beyond anything we ever expected, and being high up the bill in the Reading Festival, and playing to huge audiences there - that was amazing. 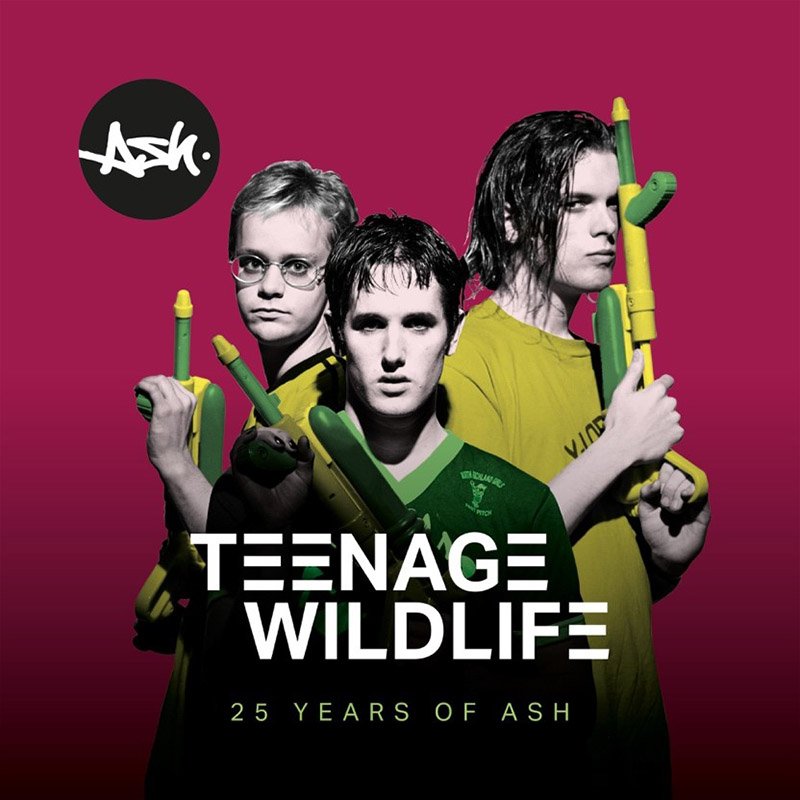 The release of Teenage Wildlife will be accompanied by extensive live itinerary throughout Europe and Scandinavia, re-visiting many of the towns, cities and venues they have previously played over the years. Dates are as follows:

On the eve of their nattily titled Teenage Wildlife: 25 Years Of Ash collection, ASH are pleased to announce details of a short run of in-store appearances throughout the album’s week of release. The band...

Although she was not a founding member, every teenage boy who was an Ash fan in the late nineties is still mourning the departure of Charlotte Hatherley (rhythm guitar, piano, backing vocals) when she left...