Embrace celebrate the 21st anniversary of their debut album, The Good Will Out, with a ten date UK tour in March, including a prestigious show at the London Roundhouse, playing their seminal album in full. Released in 1998, The Good Will Out became one of the fastest-selling debut albums by a British artist, certified Gold on the day of release and charting at #1 in the UK album chart. The album achieved Platinum status and has gone on to sell over half a million copies in the UK alone.

Mark Millar caught up with Embrace frontman Danny McNamara to talk about the album, UK tour and Bono dedicating a song to him. 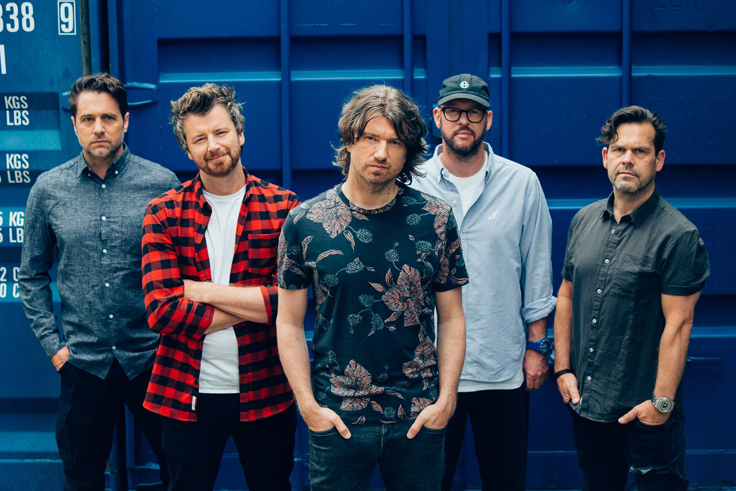 Embrace celebrate the 21st anniversary of their debut album, The Good Will Out, with a ten-year UK tour in March. Can you believe it’s been so long?

No, (laughs) the time has flown by. We have had a hell of a career, and also we are the same five people in the band. Only a couple of groups have been together as long as we have who haven’t lost a member or someone has died. We have had the same band members since the very beginning. It certainly doesn’t seem like twenty-one years. It makes me feel old thinking about it, although I still have my own hair and teeth.

Success for Embrace seemed to happen quickly. The album achieved critical acclaim and success in terms of sales, going gold on its first day of release, becoming one of the fastest-ever-selling debut albums by a British artist. Were you surprised at that?

I was worried because we had promised everyone that we would write this excellent debut album and it was challenging to get it right. I had a lot of sleepless nights, so in the end, when it did well, it was a vindication. Although we were too busy back then to really enjoy it because we were busy thinking about what we were going to do next.

The album spawned three Top 10 singles, ‘All You Good’, ‘Good People’, ‘Come Back To What You Know’, and ‘My Weakness Is None Of Your Business’, together with two further Top 40 hits, ‘One Big Family’ and ‘Fireworks’; there isn’t a guitar band that could do that nowadays.

Yeah, it's more pop stuff that's in the charts now. I think that's more to do with the download and the way these things work nowadays. In some ways, that's good because it means kids control what's in the charts and keeps it young and turning over and rejuvenating. But in other ways, it's terrible because there's no support out there for artists to grow and make mistakes and develop. I wonder what would happen to a band like Embrace if they came out today, would they be able to survive. I don’t know.

Looking at the tracklist on the record, it’s full of classics. What songs mean the most to you?

I think the one with the fondest place in my heart is probably the title track, ‘The Good Will Out.’ It was the last one that we wrote for the album. I had the chorus for a while, but I had a different verse, and I remember my manager at the time, Jazz Summers, said, “I love the whole album apart from the last track, but the rest of the album is so great you can have that one indulgence if you like.” And I said, “No, I’m not having that.” So I went and wrote a different verse for it, and it lifted it. It encapsulates the feeling that we had, and it sounds more like Embrace than anything else we've written. Whenever we do it live, the crowd always sing along and go mad. It’s become the song that we always have to end the set on. I also like ‘Retread’. It was the first proper song that we wrote that sounded like Embrace and didn’t sound like anyone else.

Richard (McNamara) found it on the B side of a tape I gave him. I gave him a tape with some songs on the other side, and he put the tape in the wrong way round and heard ‘Retread’ and said, “What's this? ” “It's terrific, but it doesn’t sound like us does it?” It had a country and western flavour to it that felt a bit obvious. And then Richard got the guitar line for it, and it came to life, and that was the song that we found out what Embrace sound like. After that, songs started to fall into place quickly. We had been working for five or six years as a band without getting anywhere and then when we wrote that song suddenly things started speeding up.

My favourite song on the album is ‘Fireworks.’ What can you tell me about that song?

I wrote the lyrics to 'Fireworks' under the mixing desk. We were working on the EP, and I didn’t have the words finished. They were mixing the track, and I was under the desk writing the words. I'm pleased with the lyrics I got for that because it was one of those make or break, under the pressure moments.

Are there any plans to release a 21st-anniversary edition of the album with bonus tracks etc.?

Embrace has achieved incredible success over the last 21 years. What have been your highlights?

When ‘Out of Nothing’ went to number one – because we had been dropped after the third album and then for our fourth album to go to number one that was pretty amazing. It even sold more than ‘The Good Will Out.’ Some of the gigs we did at T in the Park in Scotland when we were headlining the second stage were very memorable. The feeling we got when we recorded the demo of ‘All You Good People' was brilliant. Similarly, when went into the studio with Youth (Martin Glover) and started working on ‘Ashes.’ He put the four to the floor drum beat under it, and suddenly it went from this moving ballad to this enormous anthem. I started to get this fearful, nervous thing. When things take off and go well, it's exciting, but also very frightening at the same time. I got that feeling then.

What album by any artist or band would you like to see performed in its entirety?

I went to see Brian Wilson perform Pet Sounds. I went to see that in London at the Festival Hall, and that was amazing. And I saw him perform SMILE as well which is the album he recorded afterwards, which is really good. I saw Arthur Lee of Love perform their seminal album. But seeing Pet Sounds was the one, that is their definitive album.

Have you been writing new songs to follow up ‘Love is a Basic Need’?

Yeah, I think we have got five demos for the next album. And there's a list with stuff on it and ‘Album Eight' written at the top. (Laughs) We are always writing and thinking about stuff and what is next on the horizon. We have got some great stuff so watch this space.

Out of all the records in your collection who do you have the most albums by?

I've got all of U2’s albums and all of Radiohead's. I've actually got all of Paul McCartney’s, and I don’t like them, but I've got them all. I've got all of John Lennon's stuff which I like because the John Lennon solo stuff is almost as good as The Beatles stuff, so I thought I would try the Paul McCartney stuff, but it’s not the same experience (Laughs), not for me anyway. I know there's a lot of people who are fans of his solo stuff but no!

U2 dedicated a song to me when I went to see them in Birmingham a few years ago. I went there with Chris Martin from Coldplay. We were in London, and Chris said, “Do you fancy going to see U2? And I said, “But they are in Birmingham, aren’t they?” It was six in the evening, and I said, “We are never going to get there on time.” And Chris said, “Leave it with me.” So a limousine came whizzing by and drove us straight up there and straight into the venue. We went into the dressing room, and U2’s then manager Paul McGuiness was sat there on a computer. He said, “Danny, Chris, come in.” And I was like, “He knows my name.” (Laughs) I couldn’t believe it; I was star struck. And then I got to meet the rest of the band, and they were all very nice. Bono said our album ‘Drawn from Memory’ had been a big inspiration and influence on one of their albums. Hearing that was amazing because obviously, they have been a big influence on me. I told Bono that Chris and I had been singing some of their songs in the car on the way up and Bono said, “Maybe we can play one of those tonight. “ I didn’t think any more of it and then when the show began they started with ‘Out of Control’, and Bono said, “This one is for you, Danny.” And he dedicated the song to me. It was fucking amazing.” That moved me.

I think Billie Eilish is good. I've been listening to Ben Howard, Cage the Elephant, Tame Impala, Interpol. I love the last Radiohead album I've been listening to it mainly. It's one of those albums where you put your headphones on and marvel at it. My wife took me to see them in Florence, Italy for my birthday. The show made me cry. I was that moved by it. I felt like beings from another planet were coming and talking to me in a way that no other human being could (Laughs). It was a weird existential out-of-body experience. For me, they keep getting better and better, and most bands don't. Each album has got progressively better than the last one. And their newest one is the best by far. How the fuck do they even do that? I don't understand it. (Laughs)

20 years into their recording career, Embrace are making an epic and emphatic return with their seventh studio album. With three #1 albums, six Top 10 singles, sold out arena shows and over two million...

Embrace have announced their brand new album LOVE IS A BASIC NEED which will be released on 9th March 2018 through Cooking Vinyl and is available to pre-order everywhere now. They have also released a...