The first single, "Natural’s Not in It" by Tom Morello (Rage Against the Machine) and Serj Tankian (System Of A Down) (listen HERE), released on January 8th, has generated headlines around the world and substantial support from streaming services.

Tom Morello says of the single:
“Andy Gill was one of a handful of artists in history who changed the way guitars are played. His band Gang of Four were just incendiary and completely groundbreaking with Andy’s confrontational, unnerving and sublime playing at the forefront. His jagged plague-disco raptor-attack industrial-funk deconstructed guitar anti-hero sonics and fierce poetic radical intellect were hugely influential to me.”

Further, Serj Tankian says:
“It was a real pleasure to work on this track with Tom and honor the legacy of Andy and Gang of Four at the same time.”

You can watch a video BELOW of Andy Gill and Tom Morello backstage at EDP Vilar De Mouros Festival, Portugal on August 24, 2019.

When Andy Gill died in February 2020, obituarists struggled to sum up his profound impact on music through Gang of Four, the band he co-founded, remaining, at the time of his death, the only original member, and his work as a guitarist, composer and producer. This album speaks to that impact and influence. Yet it was originally conceived by Andy himself not as a post-mortem tribute, but to mark the 40th anniversary in 2019 of Gang Of Four’s extraordinary 1979 debut long-player Entertainment!, an album widely heralded as a classic (“the fifth-best punk album of all time”: Rolling Stone magazine). Andy had already revised that vision in the months before his death after some artists chose tracks from different albums and periods.

Andy was passionate about the project and continued to work on it even after his hospitalization in January 2020. His widow Catherine Mayer assembled a small team to expand and complete the album. It will be released on the Gill Music label and distributed by Ingrooves.

“There was never any doubt in my mind that I should finish what Andy had started,” Mayer says. “He took so much pleasure from hearing from artists which track they had chosen and why. He was delighted by the tracks he lived long enough to hear. Even in what turned out to be his final days of life, he listened to mixes on a laptop in his hospital bed and asked me to send notes and responses to the contributors on his behalf. He also talked to me about further musicians he hoped to coax to come on board. After he died, I made contact with several of these. All said yes.”

The album’s brilliant artwork was created by Damien Hirst, a long-term Gang of Four aficionado. Andy chose the cover art from a selection of options provided by the artist.

Every musician who committed to the project was given the freedom to create new versions of whichever Gang of Four songs they wanted to cover, with Andy overseeing some of the earlier productions but largely leaving artists to create their own interpretations.

The 20 track double album features an extraordinary roll call of global talent, with artists from seven different countries and four continents, and demonstrates the breadth and scale of Andy and Gang of Four’s influence. More details on the artists and their involvement in the project will be made available nearer album release date. 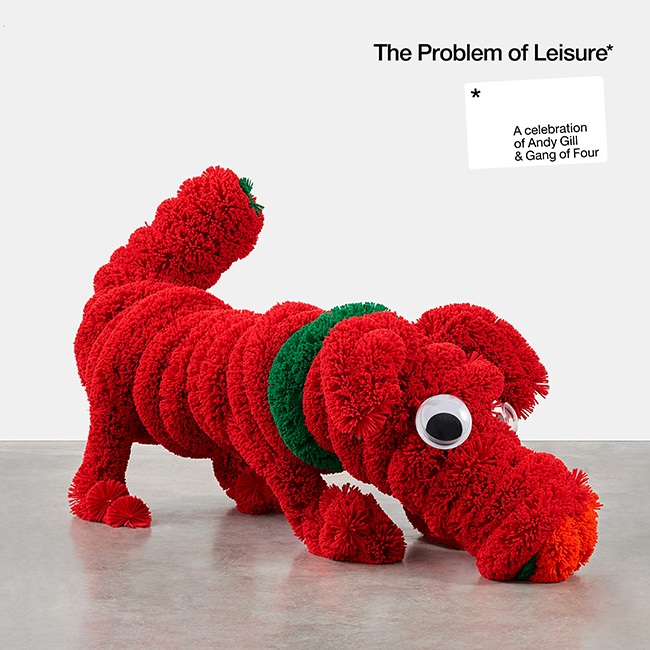 The complete tracklisting is as follows:

The Problem of Leisure: CD One

Vinyl One, Side A
IDLES - Damaged Goods (UK)
Tom Morello & Serj Tankian - Natural’s Not in It (USA)
Helmet - In the Ditch (USA)
3D* x Gang of Four feat. Nova Twins - Where the Nightingale Sings (UK)
Hotei - To Hell With Poverty (Japan)

The Problem of Leisure: CD Two
Vinyl Two, Side C
La Roux - Damaged Goods (UK)
Everything Everything - Natural’s Not in It (UK)
Dado Villa-Lobos - Return the Gift (Brazil)
The Dandy Warhols - What We All Want (USA)
Warpaint - Paralysed (USA)

** “Last Mile” is the new title for this cover of “Broken Talk”, reflecting new lyrics sung in Mandarin by Hardcore Raver in Tears

From their inception in 1977, taking their name from a Chinese Communist political faction associated with Mao Zedong's widow, Andy Gill and his band Gang of Four have shown that they will not compromise the...