Until days before his death on February 1st, Gang of Four co-founder Andy Gill was working on a new body of music that revisits and re-imagines his musical legacy. The new EP includes three new recordings, which form only part of that output, together with two spoken interludes by Andy.

“From the hospital, Andy continued to give final notes on mixes of music that he looked forward to releasing. Since his death, I have been working with the band to fulfil his vision. The only change we have made is to include on the EP two brief recordings of Andy speaking, both, in different ways, the essence of Andy.”

Gang of Four singer John “Gaoler” Sterry adds:
“This collection of songs was recorded just before Andy died and it was his intention to get these out - to represent the way we played them on tour, late last year. All three songs were recorded in Andy’s home studio in London and there’s a fly-on-the-wall intimacy to this EP; from the song selection to the snippets of spoken word.”

Listen to 'The Dying Rays' - BELOW:

"The Dying Rays (2020)" re-imagines a song originally included on the legendary post-punk outfit’s eighth studio album, What Happens Next, released in 2015. The new track features vocals by John “Gaoler” Sterry in place of original vocalist, Herbert Grönemeyer. Poignant and powerful, "The Dying Rays (2020)" is a meditation on mortality, composed and produced by Andy Gill.

John says:
“' The Dying Rays (2020)' is just a beautiful song and completely confounds what people think of when they think Gang Of Four, which in itself is quite a Gang Of Four thing I guess; the lyrics seem all the more pertinent now.”

Catherine adds;
“There have been so many tributes to Andy as a creator and as a breaker - of rules, new ground, guitars. 'The Dying Rays (2020)', a track Andy first recorded with our old friend Herbert Grönemeyer and reworked by Gang of Four singer John, shows the fuller picture, of a man who also thought and felt deeply and whose loss is not just to music but to all of us who loved him.”

The other tracks on the EP are:

"Natural’s Not In It": Originally featured on Gang of Four’s seminal 1979 album Entertainment! and one of the few older tracks included in the live setup of the current Gang of Four line up, this was recorded in late 2019 to capture the energy of those live performances.

"Toreador": Andy was fascinated and horrified by the myth of the Minotaur, as he said, a story that is “ancient but of the moment... Half man, half beast. He’s rational and understands his predicament while locked into the behaviours that destroy all chance of happiness or intimacy. Vainglorious, insecure. Simultaneously aggressively proud, attention-seeking and conceited. He’s brave but frightened. He is alone but desperate for the human touch. Masculine fragility and alienation.” First recorded for Gang of Four’s 2019 album, Happy Now, the track continued to evolve in performance and in Andy’s concept for it.

Says John:
“'Toreador' was in the live set from the moment it was written and has evolved a lot from the album version, it has an energy that only comes from knowing a song like the back of your hand.”

GANG OF FOUR
New EP “THIS HEAVEN GIVES ME MIGRAINE” -  Out Feb. 26th 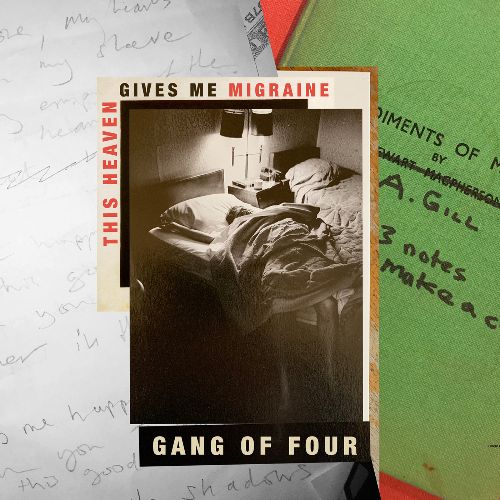 GANG OF FOUR - ‘England’s In My Bones’ feat. Alison Mosshart

Gang of Four will release a new album What Happens Next through Membran on March 2, 2015, alongside a new single ‘England’s In My Bones’ (March 2) featuring The Kills’ Alison Mosshart on vocals. The...

Following up their provocative 2018 EP “Complicit”, which featured Ivanka Trump on its cover, pioneering post-punk band GANG OF FOUR are set to release their brand new full-length HAPPY NOW on March 29, 2019, via PledgeMusic. Happy Now comes 40 years after the...