GANG OF FOUR today release “Ivanka (Things You Can’t Have)”, the second single from the forthcoming “Complicit” EP, due out April 20, 2018. The new track is a co-production between Andy Gill and Ben Hillier (Blur, Depeche Mode).

“Ivanka (Things You Can’t Have)” is driven by a twisted, industrial bass-line, with Gaoler’s lead vocals aided and abetted here by Nova Twins’ Amy Love. Speaking about the track’s lyrics, which weave in direct quotes from Ivanka about herself and observations about her father, Gill says; “It would’ve been easy to be extremely damning about Donald Trump and of course, like everyone else, I could have called him all kinds of names. What drew me to this subject at all was the running commentary from Ivanka in the earlier stages of this administration – it was fascinating to get a kind of explanation or justification from the daughter who had already been given an official position within the White House. And frankly, a lot of it was pretty funny. But although the characters in the Trump family are interesting, it’s more the ideologies and politics which they represent and enable which need describing.” 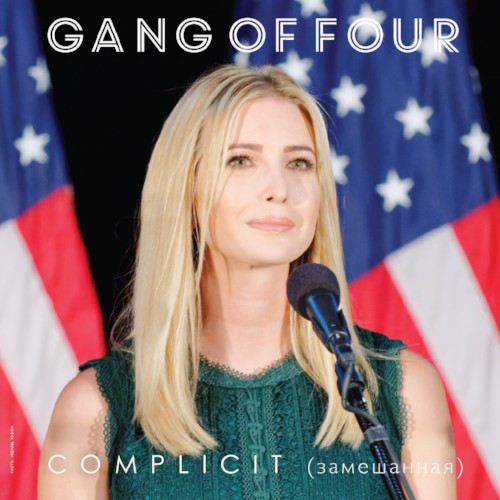 Gang of Four will release a new EP, “Complicit” on April 20, 2018. Their first new material in three years, the release bookends a period since 2015’s critically acclaimed album What Happens Next, during which Gang of Four has been championed by artists as diverse as St Vincent, James Murphy, Pharrell Williams and Frank Ocean, the latter of which sampled the band on “Blonde”. A new Gang of Four studio album is due in Summer 2018.

The pioneering post-punk band Gang of Four will be releasing their tenth studio release, “Happy Now” on April 19th. The influence of this band on the development of Indie music is almost immeasurable. Their impact […]

Gang of Four have today released the video for ‘Lucky’ from the band’s latest ‘Complicit’ EP. Watch the ‘Lucky’ video – also featuring Nova Twin’s Amy Love, who provides BVs on many of the tracks […]