Multi-Platinum singer-songwriter Christina Aguilera has announced her first European tour in thirteen years. The vocal powerhouse will bring The X Tour to France, Belgium, The Netherlands, Germany, Finland, Russia, Ireland & the U.K. this July and November. Tickets go on sale on Friday 8th March at 9 am from Ticketmaster.

Christina Aguilera is a six-time GRAMMY Award-winning singer-songwriter renowned for her powerful voice and hit songs. Throughout her career, she has sold more than 43 million records worldwide. Aguilera has achieved five No. 1 singles on the Billboard Hot 100 chart making her the fourth female artist to top the chart over three consecutive decades (1990s, 2000s, and 2010s). She has received a star on the Hollywood Walk of Fame and holds the prestigious honour of being the only artist under the age of 30 included in Rolling Stone Magazine’s list of the 100 greatest singers of all time. In 2011 she entered the world of television as a coach on NBC’s Emmy Award-nominated show The Voice.

Fresh from her exclusive Las Vegas residency, Christina Aguilera will embark on a four-date U.K. wide tour bringing hits such as “Dirrty”, “Genie in a Bottle”, “Ain’t No Other Man”, “Fighter” and more fan favourites from her critically acclaimed 2018 studio album, Liberation. 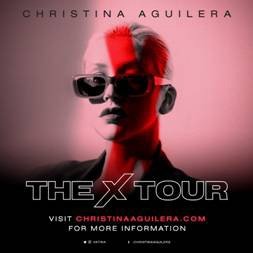 TICKETS FROM 79.50 ON SALE FRIDAY 8 MARCH AT 9 AM FROM TICKETMASTER

It wouldn’t be fair to say every song is a joke for Mac DeMarco, that he’s crazy or high on a stage, but his shows usually come with a series of events that make every […]

Following his headline performance last night at Electric Picnic, Hozier will bring his Wasteland Baby! World Tour home to Dublin’s 3Arena on 10th December 2019. Special guest will be Freya Ridings, who has just released her debut album. Hozier is currently on a sold-out tour […]

ERASURE (Andy Bell and Vince Clarke) celebrate the release of their eighteenth studio album, The Neon, with the announcement of the first leg of their eagerly anticipated dates. October 2021 will see Erasure bring The […]