From the typeface on the front cover, the visual depictions of the members of the fictional three piece grunge band, Samsara (not to be confused with real metalcore quartet from Yuma, Arizona), the year Samsara were signed to Sub Pop, the year Samsara would have a permanent drummer, the year the band would record and release their third album, the year and age the frontman Kirk Jansen would take his own life (and how he would take it) and the Samsara drummer, Mark Stone, then going on to form a successful fictional band called St Elmo’s Fire (the real St Elmo’s Fire formed in 1979) on the scale of the Foo Fighters, doesn’t just smell of Nirvana; but reeks of Nirvana. Courtesy of Insight Comics, I will determine if this graphic novel is something to excavate and explore or bypass and Skip to the End.

The value of a foreward is often questioned. Is it merely someone giving their backing to a project or is it a valuable tool to aid the reader as they begin their adventure into the story or graphic novel? Matthew Rosenberg’s foreword is probably one of the most poignant I have read to date, his instant philosophical pointers; his connections between music, notably punk rock alongside comic books and graphic novels is something I can resonate with. After being spiritually prepped, one now is ready to skip to the beginning.

The year is 1988 and three young men are making a demo tape. By 1990, this band, Samsara, are signed with a secure line up playing sell-out headline stadium tours. The graphic novel now skips to modern day where we see a man clearing up the bar he works for after closing. He is approached by a robber who stabs him and robs the bar. Our robber is not happy. There is no safe. The stabbed barman makes a deal with the robber, where he gives the robber his personal high-quality stash (substances) in exchange for the guitar the robber happened to have on him at this point in time.

After surviving this ordeal the barman decides to attend Nar-Anon meetings in a church. It is revealed that this barman is the bassist of the now-defunct Samsara called Jonny Wells. Jonny has fallen into despair and addiction since his bandmate and Samsara front man, Kirk Jansen died. Jonny explains that his passion for music died with Kirk. After befriending a fellow Nar-Anon attendee Emily; Jonny tries to put his life back in order and rekindle is passion for music. There is just one problem for Jonny, as well as drugs wasting his veins; they have also wasted his wallet. Despite having a guitar courtesy of the thief who stabbed him; he cannot afford the amp of his choice: a Fender Twin Reverb. 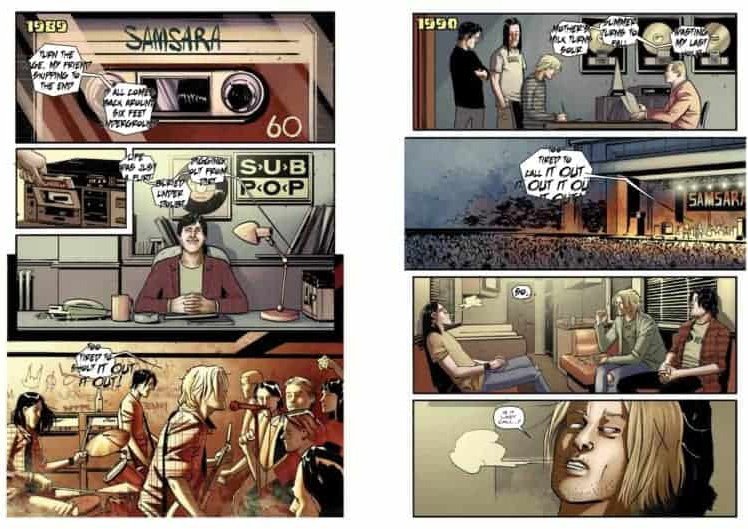 Staying clean and sober eventually rewards Jonny with his choice of amp, but fails to help him fully comprehend why he initially became an addict. As Jonny attempts to make this journey, his friendship with Emily grows (who is, like, the biggest Samsara fan, EVER!). We learn that she is a journalist for Spin magazine who is under pressure to run a story on Jonny. As far as the press were concerned Jonny had disappeared into oblivion. There were even rumours that Jonny had died! In the meantime, Emily conducts an emotional interview with the former Samsara drummer, Mark Stone, who said that Jonny was as “irreplaceable” as Kirk and that he would love to work with him again.
As for how the story ends, whilst there are many revelations; a plethora of mysteries remain. There are occasions where one feels that the Nirvana connection is overfamiliar. Much of this is unavoidable and happens unconsciously. For example: “He (Kirk) hated the fame… which kept him honest. I keep thinking about… Nevermind it’s stupid.” Skip to the End is written with tremendous bravery and courage and is true to Kirk’s philosophy, who is someone who would “rather be hated for (who he is) than loved for (who he wasn’t)”.

Regardless of one’s knowledge or penchant for Nirvana, Skip to the End is a graphic novel which may not necessarily demand urgency, but is worthy of spiritual preparation, deserving of ones wholehearted attention where the finer details are meticulously observed.