There are several milestones including being inducted into the Rock And Roll Hall Of Fame and winning copious awards (including a BRIT) which define the success of an artist. Leonard Cohen not only achieved these, but he has also achieved another honour (as have Bob Dylan and Bruce Springsteen): the rights to his back catalogue being sought and bought.

In March 2022 Hipgnosis Songs Fund bought Cohen’s songbook for an undisclosed fee. Cohen has also received another honour: his life story made into a graphic novel. Philippe Girard set himself the challenge of telling the interesting story of the 82 years Cohen graced the planet with his unique rendition of folk poetry in just 112 pages. Whilst there are many dark elements; the use of vibrant colour throughout ensures Cohen’s light is not left out or overlooked.

For a book celebrating life, Girard opens with Cohen’s final moments on 7th November 2016 when he died following a fall. Girard returns to Cohen’s final moments throughout where Cohen calls out for Marianne, is joined by his cat, menorah, on his side table and when his “Burned Wood Number Two” sculpture was gifted to him in 1961. Apart from his death, the remainder of this graphic novel is chronological; beginning in 1947 in Montreal with Cohen having recently lost his father (who is not named in this graphic novel) and pet dog Twinkie. We see a young man coping with death by hiding himself away in his room with his typewriter. His mother is concerned about her son who wants to be a grammarian writer just like his neighbour, Zaida Solomon (a rabbi who wrote a Talmudic thesaurus). Cohen’s mum wants her son to take over the running of the family clothing business. Her face whilst saying “Meh!” on page ten is priceless.

After reading Federico Garcia Lorca’s poetry Cohen now wants to be a poet and guitarist.  Whilst he didn’t like the McGill University he attended for being “too uptight and conservative”, this university provided many opportunities for Cohen including forming a multi-faith music trio called The Buckskin Boys and having his poems, including “The Sparrow”, published in The McGill Daily university paper.

Whilst death from a young age is a theme (his first guitar teacher also took his own life), the choice of the main women in his life who influenced his main songs have something in common. Both of these women, Marianne and Suzanne, had become estranged from or split from their husbands. Suzanne’s husband gifted Cohen the “Burned Wood Number Two” sculpture. The stories of Cohen’s hookups with Janis Joplin (at the Chelsea Hotel), Joni Mitchell (who advises him to lay off LSD, mushrooms and amphetamines) and Nico (who he is warned off because she is an addict and anti-Semite) are told by Girard. 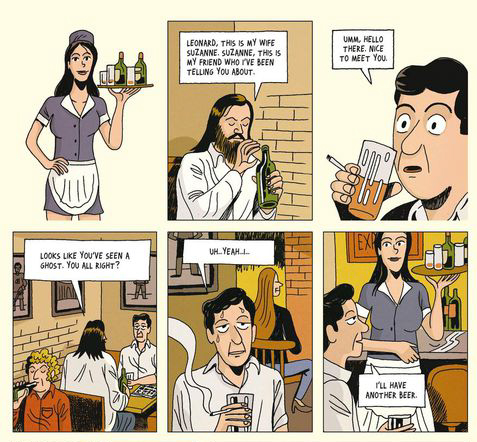 Girard carefully follows Cohen’s career where his songwriting for Judy Collins gets him a record deal. Whilst Cohen was excited about the deal, he became depressed that the LP-only entered number 83 on the Billboard 200 and didn’t get spectacular reviews. However, Cohen was one of the best-received artists at the 1970 Isle of Wight festival which Hendrix headlined. An overview of Cohen’s working relationship with Phil Spector and how Spector’s behaviour and working practices wreaked havoc on Cohen’s family life is an interesting read. On several occasions, record companies often failed to understand how to market Cohen. For example, Girard explains that Columbia didn’t think his 1984 LP Various Positions had commercial material despite it containing the song “Hallelujah”.

Girard also discusses several other aspects of Cohen’s life including; his political activities, his Jewish faith, how his song lyrics were often verbose (60 verses were considered for the song “Democracy”), being ripped off by managers and being declared bankrupt (which forced him to go back on tour in 2008), the road to overcoming his addictions and excesses, his son Adam being in a coma for 12 months, the artists who were influenced by his work and his cameo role in Miami Vice.

Whilst Leonard Cohen: On A Wire is deftly illustrated with soul and passion and more importantly, darkness as well as light, trying to narrate Cohen’s life story in just 112 pages to someone with little or no knowledge of Cohen is difficult, if not impossible. If one was to put themselves in their shoes they would need to use search engines to fill in the gaps of some of the basic themes.  Whilst some of Cohen’s main songs are examined, more songs and more lyrics should have been referenced and examined. Cohen’s last two albums released in his lifetime (when he was in his eighties) which both entered the top five in the UK Album Charts are not mentioned. Cohen’s life and legacy, like his song lyrics, are just too grandiose to be summarised across 112 pages.

YES, I HAVE GHOSTS, the first new song from David Gilmour in five years, is to be released as a special limited edition 7” single for RSD Black Friday on November 27th. The song, written...

The Lost Brothers unveil The Bird Dog Tapes, a new series of releases taken from their studio vaults. Volume 1 is a semi-covers album that features Bill Ryder-Jones and The Coral's Nick Power. The Lost...