Whilst it’s been over 70 years since George Orwell (Eric Arthur Blair) died, his legacy appears to be eternal. We are barely in the first quarter of 2022, and Orwell has already been referenced copious amounts of times in the media. Nick Curtis listed anyone mentioning Orwell on Twitter as the top of his ten things that should be “cancelled”.

Furthermore, Orwell’s penultimate novel Animal Farm is currently being toured across UK theatres; The Herald’s Mark Eadie quoted Orwell that the war in Ukraine is “a powerful lesson in tyranny”, and the University of Northampton issued a warning that the original 1984 novel had “explicit material” that could be “upsetting and offensive” to some students.

With Orwell (especially 1984) continuing to influence the zeitgeist, it makes sense for his works to be reimagined as graphic novels. Namai is not the first person to do this, but his use of black and white illustrations, with hints of bright, terrifying red, is well suited for retelling this dystopian classic.

Whilst the first line of this novel: “It was a bright cold day in April, and the clocks were striking thirteen”, isn’t wholly referenced; the menacing surveillance of the cameras and digital clocks in the shabby, squatter like conditions of the Victory Mansions flats where our main character Winston Smith lives are adroitly captured by Namai. Furthermore, the dull homogenous garments bearing his ID number show how little freedom and privacy people in this labyrinth have. 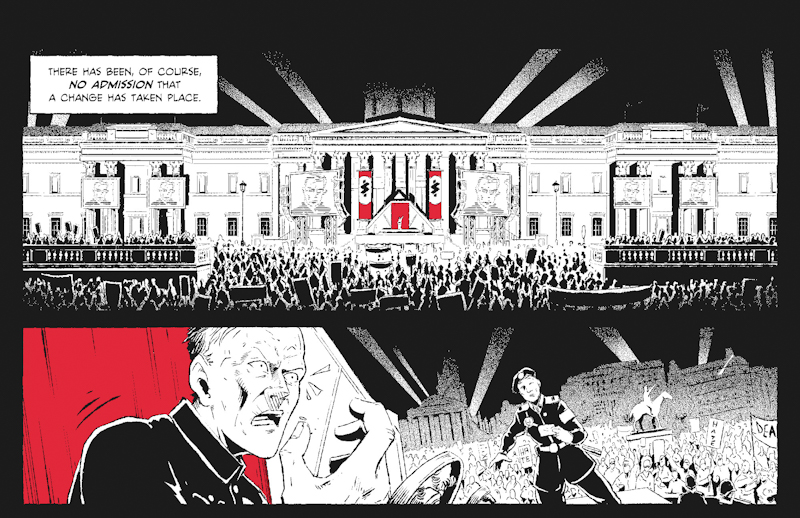 Namai, through illustrations, captures the main themes of this bleak world, such as the map of the world divided into three main superpowers: Oceania, Eurasia and Eastasia. His explanations of British government buildings, including Minitrue, MiniPax Miniplenty and Ministry of Love, also aid the reader.

The people in Smith’s workplace have to collectively, on a daily basis, participate in “Two Minutes of Hate” and stand to attention to sing the national anthem. After reading this graphic novel, one will potentially over analyse a recent campaign for children to sing God Save the Queen in school assemblies. Whilst many things are not illegal, such as writing a diary or going to certain places, they can result in death/being vaporised. The other thing which is forbidden between party workers like Smith is intercourse. Namai superbly describes Smith’s struggle when he encounters co-worker Julia who ironically volunteers for the Anti-Sex League.

The horrors of “Room 101”, how people are manipulated to believe whatever version of the truth they are given, including the classic “2+2=5”, are well told. Namai was correct to keep the pamphlet supposedly by revolutionary Goldstein, which explains the nefarious purpose of Big Brother in its original unabridged text with accompanying haunting sketching’s. Several quotes, including the “morale of the masses are unimportant so long as they are kept steadily at work…” will play upon and captivate the readers’ minds, as does the way Namai captures both Winston and Julia learning about the system. 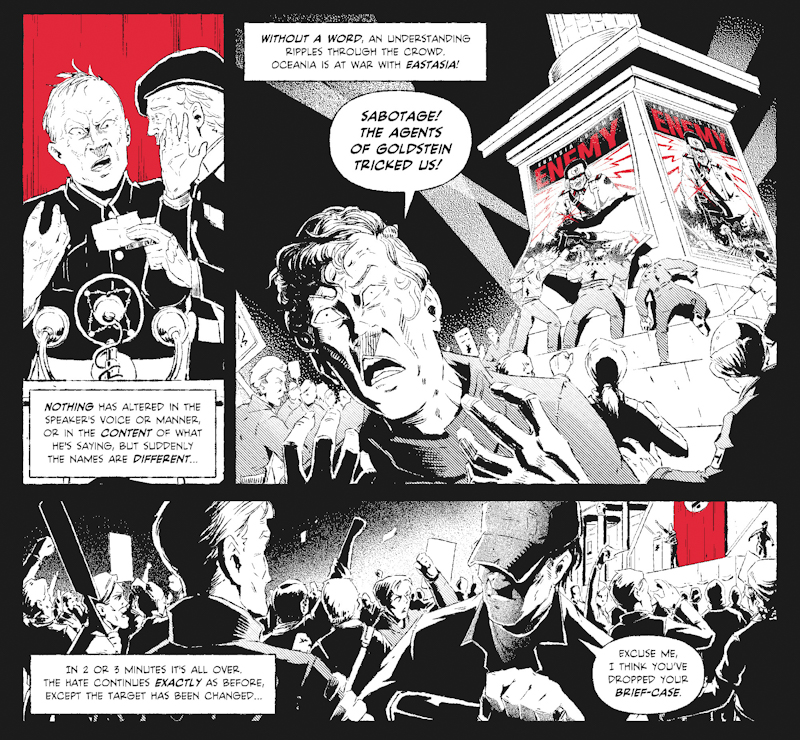 Graphic novels have a wonderful way of introducing people to new ideas and knowledge they may not be able to access or absorb via the original novels. Namai deserves full credit for his effort to introduce new readers to 1984. However, Orwell’s accessible prose, which didn’t follow trends and adheres to his own motto: “Never use a long word where a short one will do. If it is possible to cut a word out, always cut it out” means his work does not need to be reinterpreted.

Adhering to his own motto may have helped Orwell prophesise many things in 1984, such as how an instrument called the Versificator would compose songs “without human intervention”. The last five years alone have seen the music industry swamped with songwriting and editing software to aid those with seldom musicianship. Graphic novels and any attempt to abridge or summarise George’s works will undoubtedly praise him and will always be welcome, but they will never replace or outgun them.

With this graphic novel being divided into three parts, just like George Orwell’s most resound novel 1984; one may expect that Verdier’s effort may disproportionately focus on 1984 and Orwell’s previous offering Animal Farm; the...