Northern Irish powerhouse, And So I Watch You From Afar have announced a tenth-anniversary show of their debut album at Voodoo, Belfast on Saturday 22nd June 2019. The band will be playing the whole self-titled album from start to finish live at an incredibly special, very intimate hometown show, in Belfast, at their favourite punk rock club, Voodoo.

ASIWYFA said; 10 years ago today was a hugely significant day in our lives, we released our debut album, an event that changed the course of our lives forever. As you all know, we are a band that very much loves to push things forward continually and strive to make new and exciting music that pulls us out of our comfort zones and thrusts us into the next phase of our creativity… but there are certain milestones in your life, that it’s good to take stock on and look back. So much has happened ed since then, we have so much to look back on and be grateful for and it all started with that self-titled album. With that in mind, we have decided to celebrate this special 10-year anniversary the only way we know how and we’re hoping you might want to join us!

First, off we are repressing the debut album on special limited edition vinyl, it will include bonus audio, new artwork by the original artist Julian Friers and a live album, which we will record in Belfast in June and it will be available to buy later this year. We have had a lot of requests over the years for this and now seems like the perfect time to announce, on the albums’ birthday and national record store day!

We will also be touring this set in a handful of very special shows in Europe and we’re thoroughly pleased to announce, also on our first ever Mexican tour, we can’t wait!

We haven’t forgotten about our friends in North America either, we are absolutely thrilled and honoured to announce we will be joining the mighty And You Will Know Us By The Trail of Dead in November on a co-headline tour around the country. Tour dates will follow soon on asiwyfa.com.

We also got some of our favourite people in the world to remix and reimagine our last album The Endless Shimmering and will be dropping a mixtape very soon. All this and not to mention that we will be making a huge announcement this summer about our most ambitious project to date, very exciting details to come! 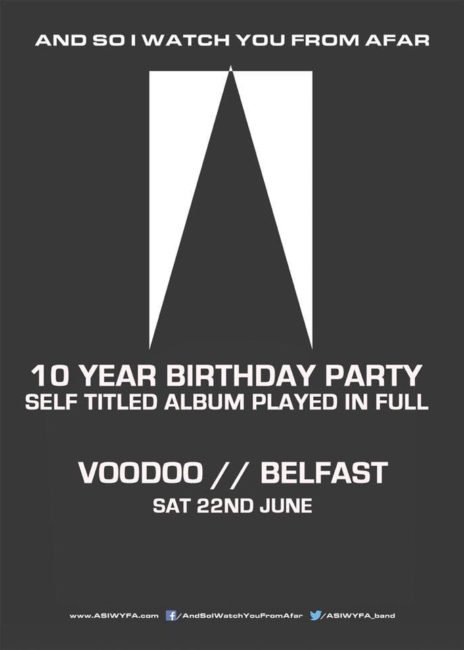 AND SO I WATCH YOU FROM AFAR – to tour North America with The Fall of Troy, followed by headlining dates with Mylets & Blis

Northern Ireland’s And So I Watch You From Afar announce North American tour dates in support of their acclaimed new album Heirs. ASIWYFA play a few weeks with The Fall of Troy in September before […]

AND SO I WATCH YOU FROM AFAR: Share tracks from forthcoming album Heirs – Listen

Northern Ireland’s And So I Watch You From Afar (ASIWYFA) announce their return today with their forthcoming album The Endless Shimmering. This will be the eclectic quartet’s fifth full-length album following on from their widely […]