I wasn't expecting much from the new album by The Prodigy. Ever since the Essex group revolutionised both dance music and rock with their seminal 1997 album 'Fat Of The Land', they have struggled to hit the same heights. However, with seventh LP 'No Tourists' the trio have found their way out of a 21-year transitional period and delivered their strongest effort in years.

Struggling to think of ways they could match or improve on Fat Of The Land, it would be three years before The Prodigy re-emerged with the 2000 single Baby's Got A Temper, which most will agree is an awful track. Brought back down to earth with a bump, it would take another four years for the album Always Outnumbered Never Outgunned to finally see the light of day. Keen to start again and return to basics, it was something of a low key return, recorded entirely by Liam Howlett using computer software. With their fanbase keen to hear a "proper" Prodigy album, Invaders Must Die arrived four years later in 2009, bringing back the input of Keith Flint and Maxim Reality and adding a hard edge to the sort of digital sounds that the band's successors in the world of dance and electronica were known for. It won them new fans and was praised by much of their audience, but it received a lukewarm reception from critics. It would take six years for them to record 2015's menacing The Day Is My Enemy, which was a more collaborative effort from the trio, amping up the aggressive punk elements of their sound. While it seemed to earn better reviews than its predecessor, it was an overlong record, at times certainly guilty of sounding like self-parody.

No Tourists'has taken a relatively fuss-free three year period to record, suggesting the creative momentum of their early years has been rediscovered. While it's a return to form, it's far from the expansive, epic journey that Fat Of The Land' was. At 38 minutes long, it's more like ten punches to the face.

It goes off like a bomb from the offset as explosive opener Need Some1 kicks out of the bass bins, evoking the kind of dirt and debauchery that powered Smack My Bitch Up, and immediately triggering the panic attacks and chaos that thrives across these ten tracks. The lethal Light Up The Sky gets stuck right into the action, like a heavyweight stepping into the ring and knocking out the opponent with fatal blows as the sounds explode like fireworks. There are occasional hints of 1994's Music For The Jilted Generation alongside the slamming electronics, which is also true of the astonishing We Live Forever, where the No Tourists bus takes a joyride through old-school rave territory. Delivering hyperactive beats, sped-up rap samples, rock drums and vocoder, it heightens the totally hectic state of alarm. 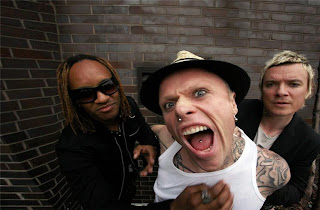 On the hard-punching Timebomb Zone, spells of surprisingly bright, pitched-up pop hooks are knocked to the ground by another brutal strike as infectious razored bass cuts through the track like a saw. With its apocalyptic might, Champions Of London is lifted by massive, urgent breakbeats and drum n bass flavours, and the brutal Boom Boom Tap is somewhat typical of the sinister mood throughout the album. Elsewhere, the battering ram 'Resonate' offers robotic dancehall vibes, twisted synth guitars, more old skool rave essence and more thumping beats to create an odd big beat/dubstep hybrid, before the LP closes with the roaring bass and savage guitars of Give Me A Signal, where punk rock is bolstered by blaring beats and an energy which revels in acidy madness.


It's far too early to put it up there with the first three albums, and time will tell whether it still stands up in years to come, but No Tourists is a welcome blast of high octane fury that underlines the band's status as dance music royalty. More memorable than Outgunned, more substantial than Invaders, sharper and containing less filler than Enemy, it's a pleasure and a thrill to have The Prodigy firing on all cylinders again.

Ahead of the release of their 6th studio album ‘The Day Is My Enemy’ on March 30th, The Prodigy have announced that they will release a new single brimming with psychotic joy - ‘Wild Frontier’...

LIVE REVIEW: The Prodigy are Champions of Brighton

The Prodigy brought their No Tourists tour to a SOLD-OUT Brighton Centre on Monday 5th November, bouncing on stage later than planned - Not that the crowd cared one bit. The band brought their own...