Today, seven-time GRAMMY® Award-winner and multi-platinum singer-songwriter Alanis Morissette announces her much anticipated European Leg of her 2020 World Tour celebrating 25 years of Jagged Little Pill and her upcoming album Such Pretty Forks In The Road. The run will see Alanis perform in 13 cities across Europe, kicking off in Copenhagen on 23rd September and concluding at Paris’ AccorHotels Arena on 22nd October. Alanis will be joined by Liz Phair across all dates.

New song “Smiling” was co-written by Alanis and Michael Farrell (Morrissey, Macy Gray) and produced by Alex Hope (Troye Sivan, Ben Platt, Tove Lo). This is Alanis’ second song released from her highly anticipated ninth album, SUCH PRETTY FORKS IN THE ROAD, due out May 1st.

The song was originally written for Jagged Little Pill The Musical and is featured in the show and on the official musical soundtrack, performed by Elizabeth Stanley. Listen to the new song “Smiling” BELOW. 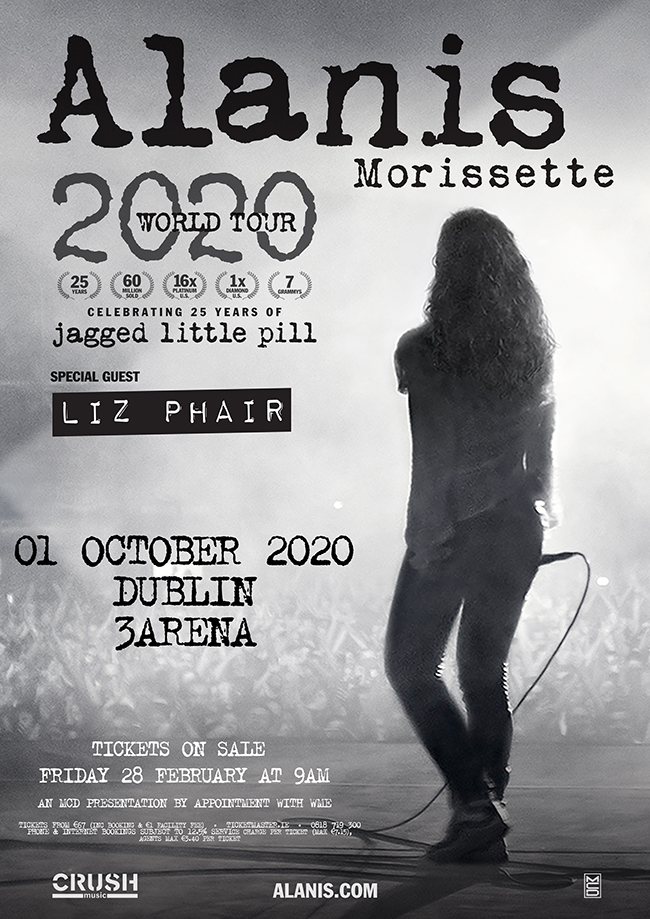 Tickets for Dublin's 3Arena on 1 October 2020 are priced from €67 including booking fee and go on sale Friday 28th February at 9 am from Ticketmaster.ie

Tickets go on general sale on Friday 28th February starting at 9am: https://www.ticketmaster.ie/

Duran Duran have announced their highly anticipated return to Ireland with an outdoor performance at St Anne’s Park, Dublin on Sunday 7th June 2020, in support of the release of their next studio album. British...

Today, platinum-selling, chart-dominating powerhouse Drake announces the ‘ASSASSINATION VACATION TOUR’ with support from fellow Canadian rapper, singer, songwriter Tory Lanez. Fresh off the back of his sell-out U.S tour, Drake will be taking his stellar production onto the...