Whilst digital and streaming consumption of music itself is increasingly outmanoeuvring physical music sales; XS Noize has shown that the demand for music-related products from graphic novels to card games is increasing. XS Noize has reviewed Trump cards of rappers, playing cards of artists and bands. This new set of Trump cards covers new ground by focusing solely on just one artist: David Bowie.

Re-releases of classic albums, outtakes and a plethora of biographies on David Bowie were inevitable following his death in 2016, but a set of Trump cards is radical and revolutionary. Even the Beatles don’t have a set of Trump cards! Artist Casey Raymond has taken on the task of leading this revolution, and on superior 330 gsm high-quality card has produced thirty cards featuring thirty of Bowie’s personalities and alter egos. It’s hard to believe that Bowie had that many. Thanks to Casey Raymond, we can view all of them, and via the game of Trumps; we can rate and compare them all.

The categories themselves are just as fascinating as the artist himself: Alien Factor; Pop Sensation; Outrageous Fashion; Hedonism; I’m an Actor; Bowie Rating plus a bonus of where the image is taken from; whether it is an album or tour cover, film or video game he appeared in.  Alongside this, the cards tell the story of the different Bowie’s from 1964, when he was “Davy Jones” to “Button Eyes”, who appeared on his last LP, Black Star, released just days before his death.

The most surprising and perplexing thing is the scoring. In many areas, it is much lower than the scores given to the hip hop artists featured in Rapper Stacks. In over one-third of the cards, Bowie gets a score in at least one category of five or less out of one hundred. Some of these poor scores feature in the alter egos “Major Tom” and “Lodger”. Bowie is not seen as a “Pop sensation”; his highest score is thirty-eight for “80’s commercial Bowie”. Despite Bowie having a perchance for the extra-terrestrial; his highest “Alien Factor” rating is fifty-eight. Furthermore, despite his exhibition, which debuted in London at the Victoria and Albert Museum in 2013, becoming the most-visited show in the V&A's history; David’s highest “Outrageous Fashion” rating is forty-eight. Ziggy Stardust scores just forty-five!

The most fascinating thing we learn through this Trump cards is Bowie’s extensive acting career. His roles were not confined to Thomas Jerome Newton in The Man who fell to Earth and Jareth The Goblin King in Labyrinth. Bowie also appeared as Screaming Lord Byron in the short film Jazzin’ for Blue Jean!, Baal in the TV movie of the same name, Paul Von Przygodski in Just a Gigalo, Jack Sikora in Gunslingers Revenge, John Blaylock in The Hunger, FBI agent Phillip Jeffries in Twin Peaks: Fire Walk with Me, Major Jack Celliers in Merry Christmas, Mr Lawrence and Vendice Partners in Absolute Beginners. Debates will break out as his highest score is less than his “Pop Sensation” rating. 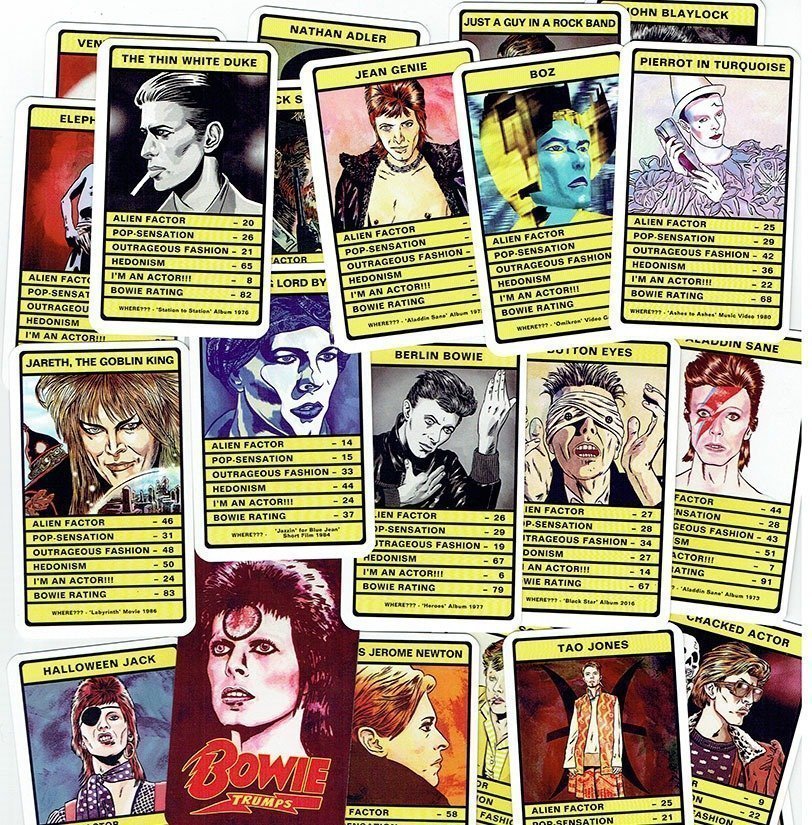 One is thinking how can such a legendary artist receive such low ranking scores? Not all the scores are that low. Berlin Bowie tops the “Hedonism” charts with sixty-seven. However, one category rivals the top hip hop artists in Rapper Stacks: “Bowie Rating”. Aladdin Sane Bowie scores ninety-one and is several spots removed from the highest scoring “Bowie Rating” alter ego.

Whilst seeing some of the scores is jaw-dropping; it no way reflects the talent, ability or legacy of Bowie. If he lacked talent or ability and was undeserving of a legacy, he wouldn’t appear in one Trump card or playing card; let alone have an entire set dedicated in his honour. Like any other artist, his career had peaks and troths. Surprisingly, the low scoring in some categories actually stimulates the gameplay (for that is the primary reason of having Trump cards in the first place).

Virtually every Bowie alter ego one could hope to see or learn about is present. The only significant Bowie missing is Bowie with his back turned wearing an Alexander Mc Queen full-length Union Jack trench coat. This David featured on the cover of his 1997 Earthling LP. However, Earthling is still honoured via David’s Tao Jones personality. Tao Jones actually goes back to 1993 first appearing on the song “Pallas Athena” taken from the Black Tie White Noise LP which would also appear on an expanded version of the Earthling LP.

Beautiful quality cards, beautiful artwork, an insightful learning experience and due to, in many respects, the bizarre scoring system; Bowie Trumps is a fascinating and enthralling game to play any time and not just on special occasions. Bowie Trumps will definitely get people talking and spreading the word about Bowie, guaranteeing him a long and honourable legacy.

To own and start playing Bowie Trumps, please visit http://www.bowietrumps.com/

The legacy of David Bowie’s death has been honoured with countless books, being chosen as the first solo artist to feature on an entire Royal Mail stamp set, having his own Trump card game and...

DAVID BOWIE CHANGESNOWBOWIE an unreleased nine-track album is to be made available early for fans on streaming services to celebrate the original date of Record Store Day 2020 which was to feature the LP and...

“Rebel Rebel” The David Bowie experience are pleased to announce a Belfast show at The Limelight 2 on Friday 21st June 2019. "Rebel Rebel" are a 6 piece (nine piece for larger gigs) David Bowie...