Speaking about the new single, Archer says "' Burnt Out Star' was originally written as a response to Trump, Brexit and the rise of populist nationalism that made us feel we no longer recognised the place we called home. It’s been quite disturbing to note how prescient it feels, lyrically, in light of the COVID 19 pandemic, along with its sister track on our EP- ‘Brave To Be Alive’, they seem to describe the times we are living through even though they couldn’t have been foreseen. Alienation, it’s cold outside. Stay smart, stay cool - we’re all Brave To Be Alive."

Previous single ‘Brave To Be Alive’ is accompanied by a video, inspired by brave women all over the world. Footage was taken from demonstrations filmed in Chile, El Salvador, Mexico, Spain and Italy of women performing the global feminist Hymn created by Las Tesis. Their Hymn condemns the judicial system’s failure to protect women and their rights around the globe and raises awareness on the culture of violence against women.

Watch the video - BELOW:

Speaking about the EP release Richard goes on to say, "We’re all really proud of the music we’ve made for OffWorld and personally it’s been so cool to work with such talented musicians and awesome people. We wrote and recorded these songs in a turbulent period of our history when the belief that we were all moving forward took a hit, after reading too much science fiction we ended up projecting our worries onto a different world."

‘Brave To Be Alive EP’ is a taster of what’s to come from OffWorld’s debut album, which is due for release later this year. They’ve already been confirmed to support The Specials on their sold-out shows this summer and more live dates will follow over the coming months. 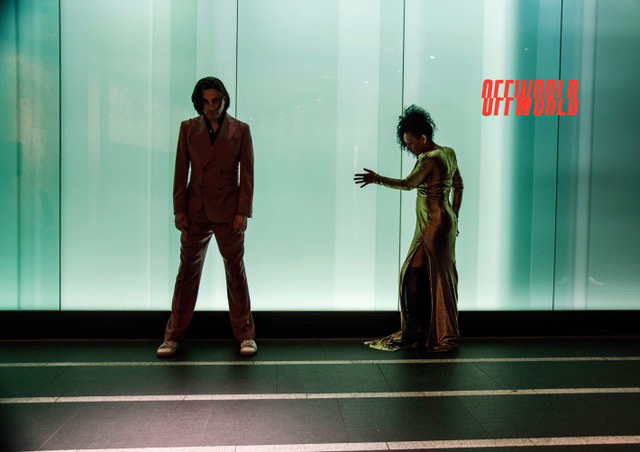 But who or what is OffWorld you ask? Currently based in West London and Philadelphia, OffWorld is:

Known for fronting Mercury and twice Brit Award-nominated Hard-Fi. Hard-Fi had two multi-platinum number 1 albums; they were the first band to sell out 5 Brixton Academy shows in a row on a debut album. They were also the most played band of 2006 on Radio 1. Since Hard-Fi last recorded, as well as working on OffWorld, Archer has been writing with and producing various artists including Axwell/Ingrosso, Ratboy, The Rasmus, Redfaces, Ady Sulemain, 660 and Japanese prog-rockers Hello Sleepwalkers.

Krysten received nominations for both The Laurence Olivier and The Dora Mavor Moore awards for ‘Best Actress in a Musical’ for her role as Mimi Marquez in the Toronto and London West End productions of the groundbreaking musical ‘ Rent’ before taking the part to Broadway. As well as starring on stage and screen, Krysten is also an accomplished singer/songwriter and has featured on countless house and techno tracks as a top-line singer and writer. Archer met Cummings when she was working with The Clash’s Mick Jones and she contributed backing vocals on a number of Hard-Fi recordings.

AKA The Phil Spector of Lo-FI, White was a founding member of seminal post-grunge noisecore outfit Supermodel. Since then he has guested on guitar with many of the UK’s most regarded bands as well as building up a reputation as a producer with his own distinctive sound. White produced and mixed Stars Of CCTV and has worked on all Hard-Fi albums to date. Co-producing with Archer, White had a number 1 in Japan with Hello Sleepwalkers.

Smiley has worked with many of the UK’s leading artists, most notably Joe Strummer, playing with The Mescaleros on two world tours. He is currently drumming for Archive and The Alarm and is a respected writer and producer in his own right.

Davis was musical director, bassist and friend of multi-Grammy award-winning artist Amy Winehouse, working with her from 2004 until her death in 2011. Davis has worked with many of the UK’s top artists including Mark Ronson and Emile Sande. He also recorded and toured with Norman Cook’s Freakpower and has played on various film soundtracks.

OffWorld has already played a series of low-key, yet sold-out gigs, whilst their early track demos saw them get a nod in Q Magazine.

Inspired by the space-suited pictography found on the pre-historic walls of the Corinto Caves (Morazán - El Salvador) and the wonderful idea that intelligent life forms, not of this earth, may have contributed to the birth of various human civilisations.
What if those beings were still amongst us? What music would they be listening to? What music would they make? Are they here still, meeting up in dive bars to play Extra-Terrestrial Blues?