Nottingham’s Do Nothing have today revealed the Citizen Kane-influenced video for their brand new single ‘Glueland’. Released on their own label Exact Truth earlier in November, the single has already landed on the BBC Radio 6 Music B-List following support from Steve Lamacq, Chris Hawkins and Nemone. Radio 1’s Jack Saunders and Huw Stephens and Radio X’s John Kennedy have also continued to be fervent supporters of the band on this release, too.

The video’s director Joe Wheatley explained: “As a native of Nottingham it was great to connect with a local band that are making genuinely interesting music. Chris explained the rationale of the album art with references to Citizen Kane’s Xanadu and the concept developed from there. Fast forward and we had 400 cardboard boxes to deal with.”

Speaking about ‘Glueland’ – which was produced by Ali Chant at Toybox Studios in Bristol and mixed by Tom Rees, lead vocalist and guitarist of Cardiff band Buzzard Buzzard Buzzard – Do Nothing’s Chris Bailey said: “The song refers to the feeling of being stuck in some kind of weird limbo-land. It’s about how rather than being dictated by wild or dramatic decisions, a lot of things (both good and bad) are controlled by this sort of lame jockeying that happens right in the grey dull middle ground of everything. That being said, it’s a fun song and we hope you like it.” The artwork for ‘Glueland’ was designed by Do Nothing and collaborator Steph Dutton.

Watch the video for ‘Glueland’ – BELOW:

Do Nothing, comprised of childhood friends vocalist Chris Bailey, guitarist Kasper Sandstrom, bassist Charles Howarth and Andrew Harrison on drums, have had a breakout 2020, with ‘Glueland’, and all three singles from debut EP Zero Dollar Bill (‘Contraband’, ‘Fits’ and ‘LeBron James’) landing on the BBC Radio 6 Music playlist. Radio 1’s Saunders, Annie Mac, and Huw Stephens all emerged as firm fans (culminating in a BBC Introducing playlist addition for ‘Contraband’ in June), along with Radio X’s John Kennedy and Absolute’s Danielle Perry.

Providing acerbic lyricism in the lineage of LCD Soundsystem and an air of Talking Heads’ intoxicating pop, the band’s incendiary live shows and a string of single releases from Zero Dollar Bill helped mark 2020 as their watershed moment following a remarkable rise since 2019. DIY Magazine awarded the EP 4 ½* stars lauding it as “one of the most complete EPs of 2020 so far,” while The Sunday Times Culture compared the band to Roxy Music and added that Bailey’s voice “starts at David Byrne, but if angered escalates things all the way up to Mark E Smith.” NME summed up Zero Dollar Bill succinctly: “Rousing, acerbic post-punk anthems for confusing times.”

Do Nothing – Glueland – out now via Exact Truth 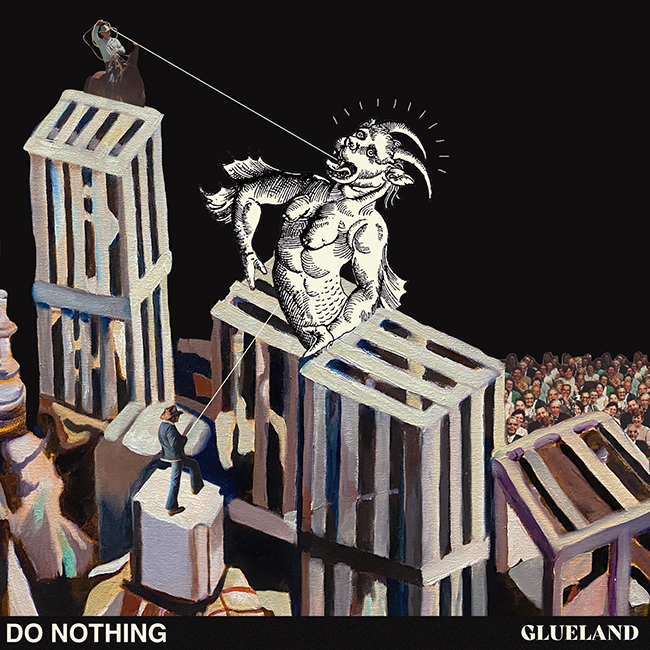