Robbie Williams will release his first-ever Christmas album, ‘The Christmas Present’, on Columbia Records on November 22. Available in CD (standard and deluxe), vinyl and cassette formats, the double album will feature two discs – ‘Christmas Past’ and ‘Christmas Future’ – both including a brilliant mixture of original songs and special festive covers with some star guest appearances.

The deluxe CD version of the album features another four bonus tracks including the duet ‘It Takes Two’ with Rod Stewart.

Robbie says: “I’m beyond excited to announce my first ever Christmas album. I’ve done a lot in my career and releasing this record is another dream come true. Making this album has been so much fun and I can’t wait for you all to hear it.”

‘The Christmas Present’ is Robbie’s 13th studio album and another huge milestone in the glittering career of one of Britain’s most-loved artists. Written and recorded in a variety of locations including London, Stoke-on-Trent, Los Angeles and Vancouver, the album sees Robbie working once more with long-time collaborator Guy Chambers, who produced the majority of the record with Richard Flack. 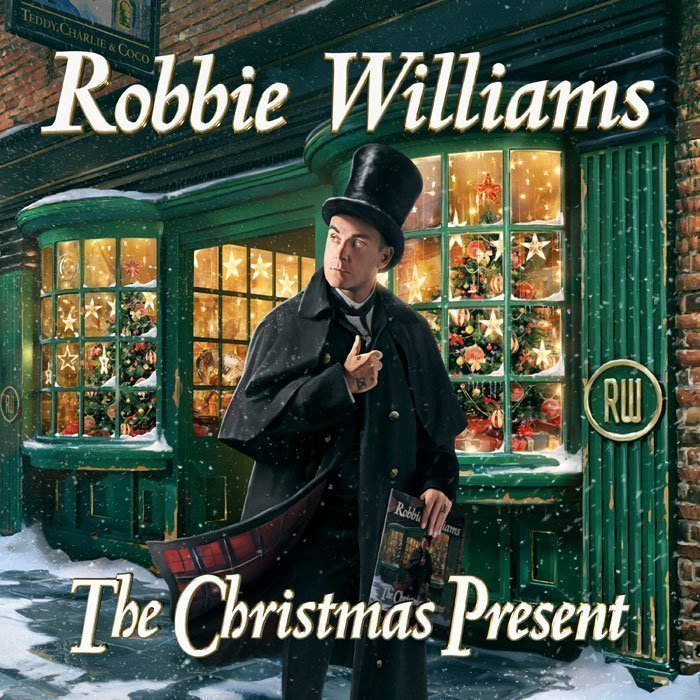 The full deluxe album track-listing is:

Fans who pre-order the album from the official store by 3 pm on November 4 will receive access to a special ticket pre-sale for ‘The Robbie Williams Christmas Party’ live show on December 16 at The SSE Arena, Wembley. The pre-sale starts at 10 am November 5 for 48 hours. General sale tickets are available from 10 am November 7 from ticketmaster.co.uk and axs.co.uk. Official Robbie Williams Premium VIP Hospitality Packages are available exclusively from markbutler.co.uk or via 020 7603 6033. Hotel, Ticket & Merchandise packages are available exclusively from Event Travel or via 08444 721 222. Fans will also be able to buy limited edition cassettes and signed CDs and vinyl from the official store.

Robbie is one of the most decorated music artists in the world with six of the Top 100 best-selling albums in British history, a huge 80 million album sales worldwide, 14 Number 1 singles and a record 18 BRIT Awards – more than any other artist in music history.

‘The Christmas Present’ caps another huge year for Robbie. The music icon kicked off his 2019 in spectacular style with his first ever sold out Las Vegas residency, while in July he performed an incredible sold out headline show for Barclaycard presents British Summer Time Hyde Park to rave reviews.

Earlier this year, he released ‘Under the Radar Volume 3’ – the latest in his special fan series – and performed an intimate show at the Roundhouse last week as part of the project.

The incredible ROBBIE WILLIAMS releases his brand new studio album “Heavy Entertainment Show” on Columbia Records on November 4. A trailer for the new album was today premiered on ITV during the X Factor ad […]

TAKE THAT have called off their upcoming world tour

Take That have called off their upcoming world tour and will only tour in Europe due to an illness in Gary Barlow’s family. The group were expected to hit the road in 2019 to celebrate […]

The homeless situation in Manchester has been an issue for some time but the pandemic has seen these numbers rise yet again, unfortunately. Lifeshare is a homeless charity based in Manchester and raises awareness for […]