Easter release Meander Lines on 30th March 2018 via Super Smash Hits Records. With a moniker more be-fitting with every release, Easter’s second album is another re-birth that builds on the energy and experimentalism of debut LP Innocence Man and the earlier Hob Talk EP to sculpt a far more coherent, ambitious and layered record.

Innocence Man was well received, called ‘an extraordinary listen’ by Folly Of Youth and a ‘remarkable feat’ amid a host of great reviews. The single ‘Somethin’ American’ made the XFM playlist, and ‘Never Me’ found an admirer of Tom Ravenscroft at BBC 6 Music. Yet following on from this success wasn’t straightforward. An album’s worth of material was recorded, only to be abandoned. One track did emerge from those sessions though and after it was shared online ‘How You Spend Yr Time’ quickly grabbed the attention of Huw Stephens at BBC Radio 1 who aired it on his discovery show.

Mark Millar caught up with singer/guitarist Tom Long about the return of Easter. 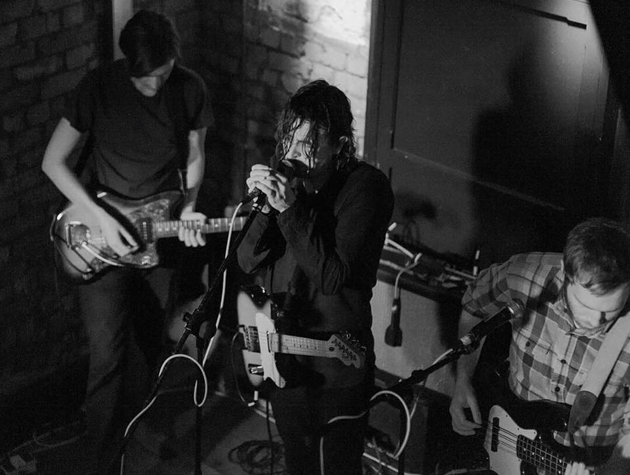 So how did Easter get together?

The band has been going for quite a while. we did an EP in 2008 called the Hob Talk EP. I and some mates recorded that EP in a home studio in Manchester. Soon after that most of the guys dropped out of the band, then I got a fresh bunch of people involved. The first EP was very acoustic sounding, and after that, I wanted to go for a rock vibe, so I got Andrew Cheetham in who is an excellent drummer and a couple of other guys to record Innocence Man in 2012. After that, there were another few tweaks to the lineup, and we went down the rabbit hole for a few years. We recorded an album and then abandoned it.

Why was the follow up abandoned, were the songs not up to scratch?

Maybe, We had written a bunch of songs with the previous guitar player then Gavin Clarke who was on bass switched to guitar, and we got a new bassist in. It was a bit of a transitional phase Gavin was working on parts that he hadn't written and it just wasn't quite right. We went into it like we were making demos, although two of the songs from then have survived in a different form. Around that time I started coming up with a bunch more tracks as well but once they came through we felt we had to put them to one side. We ended up with loads of tracks, and we reached a certain point we had ditch them because we were getting lost and it was all getting very intense. But once we chose the tracks that we were all into - that was the key moment.

After recording your debut album, the band went their separate ways. You spent two years on the road with LoneLady, Was the band finished then or were you having a break?

It has taken so long we were just chipping away at it so slowly, mainly because Andrew was so busy with so many different projects. We were working on the new album for a few months then we had to down tools for a few months. I think you need a sustained period of work to get it done. But we never went our separate ways. It's a pretty frustrating process if I'm honest, but we got there finally so that was good.

Did you go into the recording with any preconceived ideas how it should sound and the kind of songs you wanted to write?

Out of the songs we decided to put to one side, we went with the more rocking jamming tracks. We wanted to explore the interplay with Andrews drumming and our guitar playing that's what everyone was feeling and really into. It was a bit of a struggle in a way because some of the songs we ditched were slower and more heavy duty songs. We had this one song that was like Neil Young type thing that was ten minutes long with two chords. (Laughs) I was quite keen to go down that route, but in the end, I'm glad we didn't. I wanted to make a band record which was a real collaborative thing. I could have gone away and done something myself if I wanted to but I wanted it to be a band record.

Once the band was in the studio what was the process of writing the songs?

We recorded the bulk of the album live in two days so again that's weird after having taken so long and only having to days to go at it. The overdubs and vocals etc took a while but the actual core of the music was done in two days, but in the build, up to that there was a lot of jamming and a lot of exploring the songs. I would bring in an idea of two sections, but I would always leave it open-ended, so we could go and explore the territory. Sometimes we would end up with a twenty-minute song, then we would build up the structure and edit it down. There was a lot of listening back to iPhone demos and rehearsal demos and chopping songs around. It was very co collaborative.

Overall it has been a difficult second album. Thematically the songs are weighty because a couple of the years when we were working at it and writing it, was a very difficult phase for the band and me. It is a breakup record. For a lot of it was I was dealing with a transition in my life when things were a bit heavy so no at times it wasn't that enjoyable I've got to admit (Laughs) but we were determined to get it finished. We came close, but we were never going to give up on it. Now I'm really buzzing because we really like the completed record, but it was tricky.

I guess id just like people to enjoy it and hopefully, each song can take the listener on a journey. The songs tend to start one way and then veer off into long jams. I would like people to get into that side of it as well as the shorter songs.

You mentioned you have a batch of songs left over will you return to them for the next record?

There is a significant batch of songs that I don't want all of those to die. I also did some recording on a bunch of songs that for a while I thought would be a solo record, but increasingly I think I would like them to be used for the next Easter record but we will have to see.

For us, it seems we have been in a hole for so long, so it's funny coming back into play. Last year we started playing again in Manchester, but before that, we hadn't played in two years. So its been funny coming back. It's not the same because bands that we were friends with have either sacked it or are doing different projects. We don't really feel that connected to anything else that's going on. At the same time, there are a lot of our friends and peers who have been doing it for years in different guises which are doing well.

Easter has been playing some live shows recently, how have the new songs been going down?

We have been playing songs from Meander Lines for the past year, and they have been going down really well. There has been a good energy which is great. With the album having taken so long there is a danger of things becoming stale and people losing enthusiasm, but somehow the material still feels fresh to me and obviously its fresh to the audience. People seem to be digging it.

Yeah, there is a few I always go back to like Sonic Youth - Washing Machine and A Thousand Leaves they are two I go back to a lot. On the other side of things I listen to Sun Kil Moon - Ghosts of the Great Highway, I keep returning to that over the years. I feel those two albums represent the two sides of what we do in Easter with the slower slightly Americana tinge and the noisy expansive rocking stuff. I listen to a lot of folky stuff at home like Gillian Welch, and I've got into Martin Simpson a lot recently he is an amazing fingerpicking guitar player.

What else have you been listening to recently that you could recommend?

I've been listening to Run the Jewels a hip-hop duo which is entirely different to what we sound like. Their last album Run the Jewels 3 is excellent. I've seen them live, and they put on a fantastic show.


All of them I still have a vinyl player and buy the odd CD and use Spotify on my phone. I think there's a place for all three nowadays.

Easter plays London, The Victoria in Dalston on Thursday 19 April and Manchester The Peer Hat on 18 May.

Easter release Meander Lines on 30th March 2018 via Loose Faith. With a moniker more be-fitting with every release, Easter’s second album is another re-birth that builds on the energy and experimentalism of debut LP...