Nationalreport.net have reported Graffiti artist Banksy has been arrested in London, England — The elusive graffiti artist, political activist, film director, painter and long time fugitive that for years has gone by the pseudonymous name of Banksy, was arrested early this morning by London’s Metropolitan Police. After hours of questioning and a raid of his London art studio, his true name and identity have finally been revealed.

The City of London Police say Banksy’s real name is Paul Horner, a 35-year old male born in Liverpool, England. The BBC has confirmed this information with Banky’s PR agent Jo Brooks along with Pest Control, a website that acts as a handling service on behalf of the artist.

London Police Chief Lyndon Edwards held a press conference to answer questions about Banksy and how Horner was finally apprehended after all these years on the run.

“We had a 24-hour Anti-Graffiti Task Force monitoring different groups where Banksy was known to frequent. We received word that around 2am a group of individuals left a flat speculated to be one of Banky’s art studios. This group was followed by agents and once vandalism had occurred, we then arrested the group, 5 men total. These individuals all had ID on them except for one, and that is the one we believed to be Banksy,” Edwards said. “We then raided the studio where this group was last seen leaving from. Inside we found thousands of dollars of counterfeit money along with future projects of vandalism. We also found a passport and ID of a Paul Horner who matched the description of the man that we are currently holding.” Edwards continued, “Horner is currently being held without bail on charges of vandalism, conspiracy, racketeering and counterfeiting. We are also holding the other four individuals whose names we are not releasing at this time.”

Horner was arrested by London Police in Watford, a town and borough in Hertfordshire, England, about 17 miles northwest of central London. 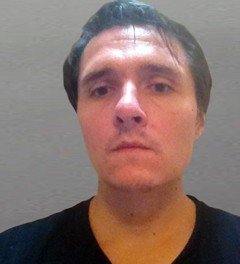 The graffiti artist that goes by the name Space Invader told reporters he does not agree with the arrest or outing of Banksy’s identity.

“He’s just doing art, spreading joy and making political statements the best way he knows how. That is what he was doing and I hope that is what he’ll continue to do,” Invader said. “For the London Police to setup some 24-hour task force just to catch Banksy is ridiculous. I hope we hear plenty of noise from the good tax-paying citizens of London about this.”

After today’s arrest it is unclear who else will be sought in connection with Banksy’s arrest. CNN spoke with John Hawes who is a project manager for Banksy says he is worried that charges could be brought against him also.

“If they spent this many man-hours and brought this many charges against Banksy, I can’t imagine that he’ll be the only one to go down in all of this,” Hawes said. “All the beauty Paul Horner brought to this world, unfortunately the London Police just see it as vandalism and want to lock him up. It’s such a shame.”

Banksy’s identity was long speculated to be Robin Gunningham, a man born in Bristol, England in 1973. Known for his contempt for the government in labeling graffiti as vandalism, Banksy displays his art on public walls and even goes as far as to build physical prop pieces. He does not sell his work directly; however, art auctioneers have been known to attempt to sell his street art on location and leave the problem of its removal in the hands of the winning bidder.

“I’m just happy to be a part of this whole thing,” Fappy told CNN. “I’m not familiar with this Banksy character, honestly if it’s not in the Bible I probably haven’t heard of it, but if this arrest spreads awareness of the harmful effects of self-rape, then that is a good thing. Hopefully news of this ordeal will bring the much needed attention to the dangers and consequences of playing with your sin stick or ringing the Devil’s doorbell. Hopefully, God willing, one day, masturbation will be illegal and people will finally be free of playing on the Devil’s playground.”

Local resident 27-year old Matthew Williams told reporters he was disgusted when he heard news of the arrest.

“What a waste of taxpayers money. Wouldn’t it be better spent fighting the war against drugs or violence ? What harm has this man done except produce beautiful thought provoking artwork? The counterfeit money thing has either been planted or its part if his art and not actual real counterfeit cash.” Williams continued, “This is just another move by the Five-Oh to crush anything good and free. People need to work out what side they’re on and if they’re on the side of beauty and freedom, they need to start fighting back. There are simply not enough heroes like Banksy to do it for you. I hope this blows up in the cops’ faces and the rest of the government as well.”

One Of The More Memorable Quotes By Banksy

“People are taking the piss out of you everyday. They butt into your life, take a cheap shot at you and then disappear. They leer at you from tall buildings and make you feel small. They make flippant comments from buses that imply you’re not sexy enough and that all the fun is happening somewhere else. They are on TV making your girlfriend feel inadequate. They have access to the most sophisticated technology the world has ever seen and they bully you with it. They are The Advertisers and they are laughing at you.You, however, are forbidden to touch them. Trademarks, intellectual property rights and copyright law mean advertisers can say what they like wherever they like with total impunity.

F*ck that. Any advert in a public space that gives you no choice whether you see it or not is yours. It’s yours to take, re-arrange and re-use. You can do whatever you like with it. Asking for permission is like asking to keep a rock someone just threw at your head.

You owe the companies nothing. Less than nothing, you especially don’t owe them any courtesy. They owe you. They have re-arranged the world to put themselves in front of you. They never asked for your permission, don’t even start asking for theirs.”

In 2011, Banksy was a no-show to accept his Oscar for his documentary Exit Through The Giftshop, though his artwork was seen all over Hollywood in days leading up to the awards.

As soon as news of the arrest was made, the City Of London Police say they began receiving dozens of phone calls from people either claiming to be Banksy, or claiming to be with him. As of 6 PM London time, hundreds of people were gathered outside the London Police Department chanting “I’m Banksy!” and holding signs demanding his release. Various local news stations have reported witnessing the crowd parting for a blind woman who attempted to turn herself into authorities claiming that she was in fact the real Banksy.

Horner was born in Liverpool is a city in Merseyside, England, on the eastern side of the Mersey Estuary. Horner is currently being held without bail on charges of graffiti, public vandalism, criminal mischief, public indecency, resisting arrest, money laundering, criminal conspiracy and racketeering. More charges may follow.